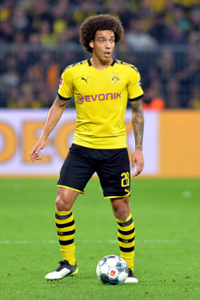 JMVP wrote:Read my second post on this page Enzo. It has some comments regarding the way he protects the ball.

He always seemed to be a fairly agile player for his size and style of play. It's not that he cannot make some smooth turns with the current EP value, but I still think it is a little bit undervalued.

Since his early stages at Standard de Liège he looked like a fairly agile and skillful player on the ball. He also used his decent BB for holding up the ball, to a lesser extent.

I know that he doesn't play on the wings anymore, but his style hasn't changed that much since then. I don't know what EP value to suggest atm, but I'm not 100% satisfied with his 72 at all.
"Willy Wanda is Chinese!!!"
Top 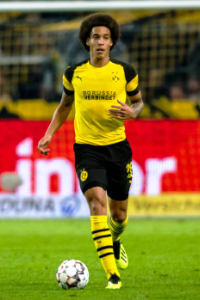 [img]https://i.imgur.com/gOBf4Nw.png[/img]
The intelligent people are full of doubts while the stupid ones are full of confidence.
Top

He's so slow nowadays, especially with the ball. I think his dribble speed should be much lower. On the other hand he's quick to think, quick to react, so both his attack and defense awareness are great. He could get *acrobatic shot too, i remeber him being quite good at overhead kicks while at Benfica.
Top

I still need to see him a bit more at BVB before updating him. In latest update, it mostly consisted on changing his default position to DMF.
But yeah, I'd say his TS/DS combo should be lowerered a bit, possibly with a slightly better RES value as well.
"Willy Wanda is Chinese!!!"
Top

Best Bundesliga summer addtion so far in current season.
He's really great at building up play when going deep for starting a smooth, precise transition to offensive phase.
Displaying some good aggresiveness in field, while also setting some scoring chances and even finishing a few of them by himself.
Adding that he's quickly building some nice chemistry with Delaney and Dahoud (and, to a lesser extent, Weigl or Götze when they are playing as well), Witsel has been providing nearly everything what BVB lacked last season for most of the time in midfield: Composure, intensitivity and solidness altogether.
"Willy Wanda is Chinese!!!"
Top

Would I blatant if I rated his Teamwork to 90 or 91?
Yeah, the current value is not a really low one, but I'm still not satisfied enough on how's his supportiveness and utterly synced movements off the ball is replicated ig atm. In his case, it's not just supportiveness for the sake of being supportive. He's developed a massive tactical sense over the years, even when he never played in a top-four European league in the past. Witsel plays in a slightly more conservative style for Belgium NT, but he still plays wisefully there with his composure and usual skills to build up play. Other CMs/DMs at BVB, like Dahoud or Delaney, surely deserves their current relatively high TW values, but Witsel should be rated a few steps above them when it comes to TW.
"Willy Wanda is Chinese!!!"
Top

I agree with your views. He’s really been something special in that midfield and I was quite sceptical when I saw he was coming back from China, but have been proved wrong. Witsel is smart and, as you said, not just supporting to be supportive. He picks the right angles and times to present himself as an option and has made this team so fun to watch. 90 would replicate him well. Was wondering about your thoughts on a few other BVB players when you have a chance.
Top

He struck as a really damn smart player against PSG, some superb short passes to get past midfielders and overall a very nice team player.
Everyone knew it was impossible. Then came along a fool who didn't know it, and he did it.
Top

He is extremely classy, yeah he lacks of speed and he looks stiff as fuck most of the time, but he is a great passer, very smart player with rgeat vision. Also I think not many people give him credit for his defensive work, I think low 70's is fair for him at this point, also a small raise in LPA is needed.
Better to die quick, fighting on your feet, than to live forever, begging on your knees!
Top

Akephalos wrote:He is extremely classy, yeah he lacks of speed and he looks stiff as fuck most of the time, but he is a great passer, very smart player with rgeat vision. Also I think not many people give him credit for his defensive work, I think low 70's is fair for him at this point, also a small raise in LPA is needed.

Yeah that's right, his defensive work seems underrated, my suggestion for his def stats is 73. Also give a bump to his ball winning, he's a hardworker with good ability to steal the ball from the opposition and start attack with great vision. So my suggestions for ball winning is 80's and 84 for LPA.
Live life for the moment, because everything else is uncertain.
Top
Post Reply
93 posts