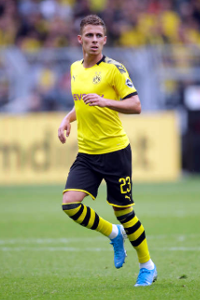 Spoiler: show
This is Thorgan, the brother of Eden Hazard, the style of football between the two are so amazing, they are the same... the difference between the both is very poor. Thorgan plays very good at Lens B and with the U19 Belgium. But since few month he is now in the first team at Lens. He begin two games and looks some fantastic skills and ability. He can do what he whant with the ball, technically very good, fast and with a decent pass in his games. His weak point is like his brother the shoots. He is bad in shoots, no technique in his shoots, no accuracy...

Thorgan is still very young so he less stamina and balance to play more with the first team, but his ability to fix his opponents or to run with the ball are amazing.

What to say about him? is he a good player? of course he is BUT his influence and performances in the most important matches is SO poor. BVB lacking a real leader in the starter 11 also strikes. I only remember maybe 2 good games at UCL, one against Inter and the other against Slavia Praga, but the knockout series against PSG he had very poor performances.

Also his Stamina seems lower, he is completely exhausted at 70 minutes.
Better to die quick, fighting on your feet, than to live forever, begging on your knees!
Top

Better to die quick, fighting on your feet, than to live forever, begging on your knees!
Top
Post Reply
42 posts