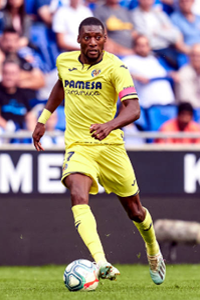 He is a prolific goalscorer for his team. He has great runs and positioning.
He’s a fairly complete forward with good speed, especially good ACC, decent strength and he’s a complete, balanced shooter as well, being decent at SA, SP, and ST. He scores a lot of first time shots, some of them more impressive than the others, and a small amount of headers. He’s especially dangerous with his runs without the ball, defenders usually have a hard time catching up on him on the first few meters, hence ACC and AGG being his best attributes in this set.
Technically speaking he’s nothing special but he’s not bad, decent dribbler and average speed on the ball. His one-touch play if fairly good too.
Everyone knew it was impossible. Then came along a fool who didn't know it, and he did it.
Top

Adrien, are you sure about the stamina increase ? Against Juve he had a super high intensity first half, but he was completely out of gas and non existent in the second half.

Dembélé looked much better in that regard, he was tired but kept trying (higher ment ?), Toko could not even sprint anymore.
Everyone knew it was impossible. Then came along a fool who didn't know it, and he did it.
Top

From what I've seen this months about toko ekambi, he looks to run a lot. May be I'm mistaken because I watched mostly cup games where they put high intensity. At least I'm sure Dembele is under him.
They have eyes but cannot see; they have ears, but cannot hear; they have tongues, but cannot speak. They are like cattle.
Top
Post Reply
4 posts • Page 1 of 1