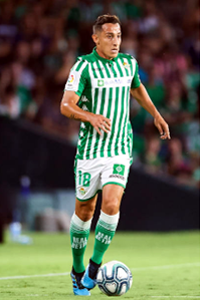 his men and sta looks ok to me. yes he is hard worker but when he is in good mood ! i think you understand what i said !
vamos arriba la celeste !
Top

Yeah, he's a bit unconsistent...and that includes his work rate. Btw new format for you

i almost forgot, you should add *Side to his Special Abilities and does he deserve Incisive Run, i haven't seen him cutting inside too often, he does it surely but not enough to warrant the card IMO...

Agree there too about Incisive and *Side.

First, his stats are freakishly similar to Santi's

.
Now that I'm thinking about it, this makes him one of the best SMs around, what a player.

Mr. Evans wrote:First, his stats are freakishly similar to Santi's

these stats were made when deportivo was a decent team in la liga. Hes not had much of a season this year, but who had at deportivo..

his shooting stats are way too high, hes pretty poor at this tbh. I'd take his sa/st down some 2/3 points or so. response too high aswell. though I'd say his lpa would be fine at an 84. Hes a real threat from anywhere on the pitch with his aerial passing, real threat from set pieces too. I don't know know about his speed either... never seen that fast to me I seen him running in full flight only a few times, but I wouldn't put him over 84 TS... acc looks more like an 86 too me too...
Top

Updated with last suggestions. For RES, personally I'll go for 81 like Santi.

Seriously, what a goal.

Side: B
In this season he's playing in the right side too. He's changing his position with Diogo Salomão.
The intelligent people are full of doubts while the stupid ones are full of confidence.
Top

He ends contract. Valencia will sign him. Updated btw.

No new news man. Seems like he ends contract by the end of this year and will go Valencia for free, but I dont really know. Nothing new really :S I hope It's soon, as he's a top class player indeed.

It´s said he had already signed with Valencia some months ago, but couldn´t made public, cause you are not allowed to negotiate with players who have a contract running for more than 6 months.

Hope he will fill the big gap Valencia has on his left midfiel, after selling Mata. This season Valencia has no specific player there: Piatti played always as SS or RWF for Almeria, Canales isn´t clearly a side player, Pablo doesn´t feel really comfortable playing on the left hand side, just as Feghouli. The only decent option is putting Jordi Alba there.

I would try Tino Costa on the LSM, he can put some amazing crosses with his curl, would help while defending, could go to the middle to try shooting etc. He wouldnt be a fast SM, but he could be something like a left-footed Beckham.
Top

Mathieu isn't doing half bad at that position, to be honest.

About Guardado, he's as good as irregular. Considering his talent and skills, he should have been a more important player for Deportivo in past years than what he really has.

If I speak earlier...