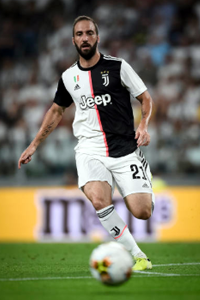 tomaster wrote:I say he rely on his power more than placement (with both feet).

at first i am asking about his weak foot accuracy/frequency ! so there is no relation with his other foot here.
second, currently he has 8 wfa and 7 wff . i suggested to make a swap ! i mean give his wfa 7 and wff 8 . as he hits them quite hard but lacks that accuracy.
so how i was wrong or from which point you are arguing with me ?

now stating about his right foot shooting i still think he should have high shot accuracy than shot technique.because he simply can shoot from tight angles or pressured situation.he can place the ball in to the post with great accuracy but simply isn't that great as a shooter from tight positions.
the only spectacular shooting he can is his first time volleys.which are well represented with 1 touch play.
but when he needs to shoot from crowded situation or shooting from awkward situation he simply can't shoot to the aim. and that's why people thinks his shooting isn't that accurate.
one great example could be in 1-1 situation he tries to dribble the goal-keeper and than go for goal.but simply he doesn't have the technique to beat the keeper instantly .
or other is his goals are all from in side the box or tap ins.
i really can't remember when he last scored a spectacular shooting from out side the box or using insane shooting technique from an awkward position.
his shooting technique needs to be downgrade at 80/81 with SA 82/83 .
vamos arriba la celeste !
Top

You clearly don't understand me don't You? At least Fixer did..
What You say about his header anyway?
Top

ya i don't date with you but Fixer did

any way i have no idea about his header cause i never recognize it seriously ! i mean he never looked as a accomplished header to me!
vamos arriba la celeste !
Top

He is very wasteful but when it come to heading he don't waste that many opportunities.
Top

i really don't think he needs high value in header.maybe people excited to increase it for that header.ok maybe 78/79 !
now for these reasons i think he shouldn't get much boost :

1.when a ball comes flying to him he is more comfortable to make a volley rather than header even if it is in a suitable height to make a header.
2.he rarely makes himself positioned to make a header.not his strength.ya he knows that he might miss simple opportunity by shooting wide(simple lacks proper connection and accuracy)but still will shoot rather than attempt to head . and this applies for high ball.
3.if you watch his statistics it also suggest that he is not a guy who likes to head even if he had scored good header goals.but the number of header goals of higuain is minimum.

You serious? The higher Header value the more likely player will use head instead of foot? I would never guess.
Top

ya for crosses . just like when you give a player 1 touch he will make volleys. a player with 90 header and may be overall 80 shooting(without 1 touch) will use header than shooting in crosses or aerial balls. or at least make himself well positioned for heading.
vamos arriba la celeste !
Top

Ok now I know Chamakh is rated good, he use head in ANY occasion (I think he would like to use head even when ball is on the ground)

when higher is the stat, higer is the tendency to use it
Descansa en paz Chucho
Top

There's no way he's that tall

never seemed me SO fast... neither before the injury
here an example of his speed, lose with nagatomo who have 86/88, maybe nagatomo need a bit raise in TS, but i never see higuain so fast honestly

and there he is destroying puyol [youtube] http://www.youtube.com/watch?v=FUf0Cx9CW_k[/youtube]
Top

yes, but was what teh speed of puyol in that time? 82/83
and in that play puyol need turn a bit to catch higuain who was come already running, and IMO reac ta bit late
THANKS FOR EVERYTHING, THERE WILL BE NOT ANOTHER LIKE YOU

hes already running and he has the inside track.. and apparently hes worth 84/84 form those days.
Top

Yeah he destroyed Puyol but Puyol wasn't all that fast (espeically in that particular run but also in general) in 09/10. It has to be said that the time Higuain got these speed stats a lot of La Liga players sat on (much) higher speed values than they are now, values they didn't deserve. And Higuain got these (mostly) due to comparisons that were made. I think he was a TS 87/ACC 88/DS 85 before the injury myself.
Last edited by Mr. Evans on 2011 Sep 08, 23:08, edited 1 time in total.

exactly.. i forgot DS
is fast without doubts, but i'm sure, he's not so fast like in the current set
THANKS FOR EVERYTHING, THERE WILL BE NOT ANOTHER LIKE YOU

according to me (as I set them) but apparently I'm wrong and people want higher.

Mr. Evans wrote:Yeah he destroyed Puyol but Puyol wasn't all that fast (in that particular run and in general) in 09/10. It has to be said that the time Higuain got these speed stats a lot La Liga players sat on (much) higher speed values than they are now, values they didn't deserve. And Higuain got these due to comparisons that were made. I think he was a TS 87/ACC 88/DS 85 before the injury myself.

could you share your opinion on puyols speed in his classic thread?
Top

people want higher speed to puyol in 09/0? where?

fantasista suggest 84, phil suggested 83 in TS, all are the actual values, i don't see people who want more to hm in 09/10 set...
anyway, this is off topic

i only want to talk about higuain speed, who as i already say, is high to me
THANKS FOR EVERYTHING, THERE WILL BE NOT ANOTHER LIKE YOU