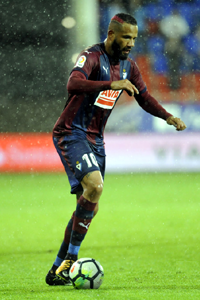 Spoiler: show
Tiago Manuel Dias Correia (born 12 July 1990), better known by his nickname Bébé, is a Portuguese footballer for Turkish club Beşiktaş on loan from English side Manchester United. He can play as a winger on either flank, as a target man or as a support striker.

Spoiler: show
Tiago Manuel Dias Ferreira, commonly referred to as 'Bebe', was a complete stranger to most football followers about five months ago. This completely changed on Wednesday evening though, when Premier League powerhouse Manchester United announced on their official website that they'd secured the services of the 20-year-old attacker for an undisclosed fee.

To say this is a rags to riches story would be an understatement, as the attacker's career is a real fairytale affair. The forward was discovered by Estrela Amadora when he played for amateur side Loures. After signing for the Reboleira, he started his career with the club's youth team. He was quickly promoted to the senior team though and played his matches in the II Divisao last term.

One season at senior level was enough to arouse the interest of a number of bigger Portuguese clubs. Only five weeks ago, Vitoria Guimaraes made a move for Bebe and lured him away from Estrela Amadora in the Portuguese third division. He never made an official appearce for Guimaraes though. The promising youngster impressed during a number of pre-season friendlies and several big European clubs showed an interest in signing him.

Five weeks after Bebe had signed with Vitoria Guimaraes, Manchester United manager Sir Alex Ferguson travelled to Portugal to meet the young attacker. That's when the transfer, completed on Wednesday, was discussed for the first time.

There's so much more to Bebe's story than just a rise to the top at a lightning pace though. The Cacem-born attacker went through quite a difficult childhood and was raised at an orphanage, Casa do Gaiato, after spending some of his childhood on the streets. He has even represented Portugal in the Homeless World Cup.

Jorge Paixao, currently the coach of Mafra, was Bebe's coach during his spell with Estrela Amadora. In an interview with Antena 1, Paixao revealed that Bebe's difficult childhood could very well make the difference. "He was raised on the streets and that's where he learned to play his football," he said. "All the players come through youth academies now and they're all the same. Bebe is nothing like that.

"He's an old-fashioned player. He learned everything that he knows on the street. He possesses a natural creativity and that could really make a difference. Additionally, he has the quality to improvise very well and he has all the features needed to succeed. He's pretty tall and is very strong in the air. He's also very fast though and is technically very good."

Manchester United almost missed out on signing the hot prospect, according to a report in Marca. The Spanish newspaper claims that Real Madrid gaffer Jose Mourinho was also keeping tabs on Bebe. However, the Reds confirmed that capture of the 20-year-old on Wednesday evening. The Guardian suggests that former United assistant coach Carlos Queiroz, currently in charge of Portugal's national side, was the one who tipped off Ferguson about the young attacker.

Bebe is a player who can play in several positions in attack. The youngster can play from both wings, as a support striker, and also as a lone forward. He will have to fight off stiff competition at Old Trafford though if he is to break into the first team. Wayne Rooney, Javier Hernandez, Dimitar Berbatov, Michael Owen and Federico Macheda are all fighting for a starting berth as well.

Bébé was abandoned as a young child by his father Francisco and his mother Deolinda. He was consequently raised by his grandmother in a suburb of Lisbon, until the age of 12, when a court placed him in the care of the church.[6] He moved to the Casa do Gaiato shelter in Santo Antão do Tojal, 20 km outside Lisbon.[6] During his time there, he and seven other residents of the shelter were invited to play for the CAIS team in the 2009 European Street Football Festival in the Bosnian town of Foča.[7][8] Despite Bébé scoring four goals in six matches, CAIS did not progress beyond the second group stage of the tournament.

It was alleged that Bébé had participated in the Homeless World Cup, but these reports were found to be false. He was considered for selection for the national homeless squad after his performance in the European Street Football Festival, but he ultimately did not play in the tournament

Having previously played for amateur side Loures, Bébé was signed by Portuguese Second Division side Estrela da Amadora in the summer of 2009.[10] Regarded as the clubs star player,[10] he finished the season with four goals in 26 matches.[11] However, Amadora were beset by financial problems and offered him around Europe for £125,000 but found no takers.[10] His former agent, Gonçalo Reis, revealed that Bébé was offered to PSV Eindhoven for free in May 2010, but PSV turned down the offer as they did not know anything about the player.[12] As their situation worsened they stopped paying his wages, so he broke his contract and signed for Portuguese Primeira Liga team Vitória de Guimarães in the summer of 2010 on a free transfer.[13] His contract with Guimarães at first included a €3 million release clause, but this was increased to €9 million following his performances in pre-season games.[13] He finished with five goals in six friendly matches.[10]

On 11 August 2010, only five weeks after he signed for Vitória de Guimarães, Manchester United agreed an undisclosed fee with the Portuguese club for the transfer of Bébé.[14] The fee was reported to be around £7.4 million, believed to be the value of the buy-out clause in the forward's contract,[15] though reports in Portugal later claimed the fee was €9 million, of which the agent company Gestifute received €3.5 million (included agent fee) and the club only received €5.5 million (about 60%),[16] as third-party ownership is allowed in Portugal. It was also reported that Real Madrid and Benfica were interested in him.[17] Bébé was recommended to Manchester United manager Alex Ferguson by Portugal national team coach Carlos Queiroz, Ferguson's former assistant. Ferguson only met him the day before the transfer.[15] On 12 August, David Gill announced that Bébé would not be sent out on loan; instead, he would work with the first-team squad to prove his worth and to learn English.[18] The transfer was completed on 16 August, following Bébé's medical and the submission of the appropriate paperwork,[19] and he was unveiled to the media at a press conference the following day, along with fellow new signings Javier Hernández and Chris Smalling.[20]

On 6 September, he was announced as part of the 25-man squad for Manchester United to play in the UEFA Champions League.[21] On 22 September, Bébé made his debut for Manchester United as he replaced Park Ji-Sung in the 74th minute of a 5–2 away victory over Scunthorpe in the League Cup.[22] On 2 October, he made his Premier League debut, replacing Anderson in the 80th minute in their 0–0 draw against Sunderland.[23] His first start came against Wolverhampton Wanderers in the Fourth Round of the League Cup on 26 October, scoring his first goal in the process, United's first in a 3–2 home win.[24] His first Champions League goal came on his debut in the competition, scoring the final goal of a 3–0 away victory over Bursaspor on 2 November.[25] On 19 February, Bébé played the full 90 minutes in a 1–0 home win against non-League Crawley Town in the Fifth Round of the FA Cup.[26]

On 15 June 2011, Bébé signed for Turkish side Beşiktaş on a season-long loan deal,[27] who have an option to make the move permanent for £2 million

Spoiler: show
Bébé was a Portugal under-19 international.[28] In August 2010, Bébé was called up to the under-21 squad for the first time for their 2011 European under-21 qualifiers against England and Macedonia in early September.[29] He made his debut for the under-21s, playing as a lone striker in their 1–0 loss to England on 4 September.[27] He then scored his first goal for the under-21 side three days later in their final qualifying game against Macedonia, scoring the first in a 3–1 win

The man. The Myth. The Legend. BEBE.

What a player.
People gon' be people. They gon' lie, they gon' cheat, they gon' steal, but as long you get yours, you keep it moving.
Top

I do have to say his SP is looking ATLEAST 85.

PK and Swerve are clearly a bit better, deserves PK 70's. SA also seems better, I not (yet) believe in green, but I believe in the highest white value.
He is not so "dumb"... He scored 11 goals (official) by Paços Ferreira, is not for everyone. Deserves a more significant amount of Attack.
Beware the positions he has on SET, he have positions in which only played 1 or 2 times in your life... should be more accurate, in my view, the WF and CF are positions sufficient for him.
KEEP CALM and HURRAY BENFICA!
Top

Yes, we have to admit he has done a good job at Paços. Ofcourse he did some hilarious things aswel. But in general good season. Anything else before i update anybody?
Sporting Clube de Portugal meu amor / Working on new sets and updating Liga Sagres
Top

he moves to Benfica:

Lol at any time I remember Ferguson opted to sign this guy over a younger James.
"Willy Wanda is Chinese!!!"
Top

he had a good season in Portugal, there is still time for United to regret his sale

The Bébé can either turn out to be a great enhancement as may prove to be a real flop. Personally, I have some hope in him...
KEEP CALM and HURRAY BENFICA!
Top

Seems to be using his actual name now.

Name: Tiago Correia - Remove name "Bébé" from its name. Use only "Bébé" in the description of the SET (Tiago "Bébé" Correia). Really good game he did today. He turned Marcelo crazy (he showed good DA, DS, ACC...) but he failed a lot in the final metres.
VCF
Top

This guy is still around lol. Guess Rayo will be worth watching again

This guy is such a thrilling player to watch

He's the kind of player who will try everything, but struggles inmensely to get anything done because his skills are so limited. I'm not even sure his DA is this good, I mean he attempts so many dribbles, yet is successful such a tiny amount of times, sometimes losing the ball in a ridiculous fashion. Other than that the set looks perfect, but I'm adding a few more cards to depict his eye-catching style of play. It's something I've wanted to do since I watched a bit of him at Rayo last season, and yesterday's match just convinced me. He crossed like 15 times in the first half alone, and his crossing ability is laughable.

he could get a few more tweaks as he's not a player that creates danger as much as a player that has 70 att, he could receive lower (68) with lower acceleration (79) and higher agg (83).

so dumb to pick the plays that benefits the team, just an adama who can't dribble but with a powerfull dip shot.
Top
Post Reply
121 posts