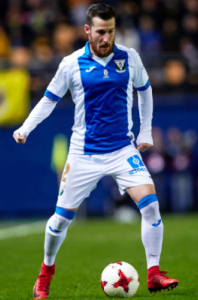 Well, as I already commented with Julito, guy needs an update. He's been pretty good so far this season, attacking well, defending well, not making mistakes, etc. Pretty competent rightback if you ask me, Rayo isn't missing Coke as much as I thought they would do.

ATT should go up a bit, to 70 maybe (he's quite a well balanced swiftback). Balance, considering how light he is (62 kg) should be at low yellows, maybe 80 would be enough. Stamina could go up a point or two (I'd rather go for 86 here). TS/Acc on the other hand is probably a bit overrated, 82/83 should be enough for him. Response could also go up to 80, AGI is fine as it is. Dribble Speed and all four passing stats can do with a +1 raise too. (to 78, 74/76 and 73/75 respectively). Shooting is ok. I'd upgrade Curling one or two points too. Finally, Teamwork could move into yellows as well, 81 maybe.

PS: His Aggresion is probably the stat which needs the most drastic raise. I'd rate him in mid/high greens, around 78.

Excellent suggestions Korinov, very accurate, I had in mind for these numbers, this guarantees supplementing with Coke, and not was easy to do

p.d updated, was much needed update, good season of this man

I heard to he isn't so bad,but definitely not for united.
Top
Post Reply
4 posts • Page 1 of 1