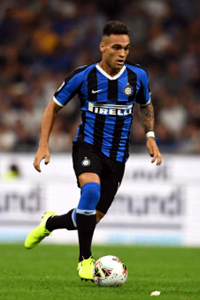 he is playing really well with bou, being the cf in the team but also he showed nice touches of technique, moving around the box and leaving the position between the defenders to get in contact with the ball, making a dribble and looking a mate. His passing needs be better - especially his sps - because he need it in his style, on and off the ball looks slighly worse imo, his burst gets my attention much more than his final speed. Falcao style btw
Top

That's what i do expect of a player praised since youth teams which was scounting by Madrid few years ago. That's what i expected from Bentancur when everybody were saying hes "crack". This guy is something else.
Top

This guy is a great CF, since his 1st match I was impressed by his talent. I do think in the near future he'll have better numbers and for sure (and sadly even being from Racing) he'll go to Europe...he has great skills and he's so direct in the box, he's so damn good. He reminds me Vietto's aparision in 1st...a scoring machine. I created this set and I do feel comfortable with it for the time being but imo his best attribute is his placement, he's so good at it.
Top

His SA is absolutely crazy, this guy is deadly when it comes to shot, so much talent. I think he can become great.
Top

I have the same view of him, and i agree on Sa..this guy is problably or will become the best in that regard in no time at the league if he comebacks because he will leave racing at the end of year, but i hope to see him play a bit more just for the desire to see developments in his game.
!!!CHUPETE LA CONCHA DE TU HERMANA!! , !!VAMOS CARAJO TE QUIERO VER!! , !! TE QUIERO VER PAPÁ!!
Top

I hope Valencia execute the right of first refusal to bring him here because Zaza and Rodrigo, well... have other virtues and to be deadly in the penalty box aren't one of them.
As far as I know, watching some videos he seemed to me similar to Villa: mobile, well rounded striker with great SA.
VCF
Top

He is damn good about placement, he is damn intelligent in attack, he is damn good using his body - vs river he trashed to maidana - he has the whole combo to be a great great scorer in a short time, seems he has everything what a modern cf needs: good technique, great force, good speed on and off the ball and a damn killer in the box. Amazing player, 9 goals in 12 matches thats freaking awesome.
Top

agg should be updated, this guy is attacking all the time, surprising the rival defenders, and he makes the work of midfielders so much easier, always synchronizing how to move in the attack , ,and mostly of the time he is from few meters from the rival area. Could have 80 at least in agg.
Top

This don't was his match, he was just clueless taking decision when he was tasked to attack, even he can't do any kind of transition with Licha.
Top

JeffVR98 wrote:This don't was his match, he was just clueless taking decision when he was tasked to attack, even he can't do any kind of transition with Licha.

I watched quite the opposite, he was the only Racing player who tried something even being injured. In the last gameplay his finishing was good imo, he did it what he was supposed to and hit the post, bad luck really. He played all up front, asked for the ball and tried to move a really though defence as Libertad is.
Top

Yeah he send some nice crosses, his last shoot was back luck and also he also participate in some movements. But if you watch really in deep his performance, he fail many simple touches, Lisandro give him really nice passes to him but he don't know what to do after then, he start to do shitty decisions and movements.
Top

Paablito wrote:He is damn good about placement, he is damn intelligent in attack, he is damn good using his body - vs river he trashed to maidana - he has the whole combo to be a great great scorer in a short time, seems he has everything what a modern cf needs: good technique, great force, good speed on and off the ball and a damn killer in the box. Amazing player, 9 goals in 12 matches thats freaking awesome.

He is crack, amazing player.

Given him an update, such a great great striker, imo it's the best aparision in AFA this year.

It seems he made the physical exams with Atletico Madrid in secret and he'll go in June cause he wants to play Copa Libertadores with Racing. I hope he can go to WC, he's a crazy talent imo.
Top

Insane talent, really. He reminds me Aguero when he emerged from Independiente, every match plays better. Today scored a hattrick and he also generated a penalty.

He should go to WC, he's so good, really. It seems he has no weak points at his game. I bet he will be the most expensive sell in AFA so far, it seems

Inter is coming for him.

I'd really raise his SA to high 80's the guy is a fucking insane placer of the ball, always hitting corners with such ease and class. I can't compare this guy with anyone lately in AFA. I'd wish him not being good since he's our derby team, but damn it, he's so fucking good, i'm really impressed.
Top

Cruzeiro. What a player he's. Given him more attack and SA, probably can go even higher in the future. Everytime Sampaoli is in the stadium watching him, he goes and scores 3 goals:

If it is a damn beast of forward, its ability to do almost everything well is incredible, is Falcao 2.0, fast with a dribble decent, great jump/head and decent with both feet. Sure your st/resp are so low? Its st i see almost in yellow, is almost ridiculous that you will only have 4 more points that Leandro Fernandez
Señores yo soy del Gallinero
Top

Just insane what this guy does, I have been continuously following his performances since the beginning of this tourtnament, each match is showing that he can reach a higher level than current one. I consider it an all-rounded CF, can head, can finish 1-on-1, has a great response, in the box he can dribble decently in tiny spaces, he is not afraid to decide what to do in key moments (even though can be do a bad decision), a player with great personality in the field, I hope he remains in Racing a while longer, his contribution to the team is outstanding and i have not seen a player in Racing with so much talent since Giovanni Moreno.

Talking about his ST, I would like to see a colored value with regarding that, he kills every ball that is placed in front of him and shoot from tigh angles, with 74 he would be prone to miss shots at first touch plays, and in fact he is not bad in that aspect irl , and a value like 74 would make it more likely to fail, i guess he probably deserve 75/76.

Last year i post, that there are some things about his performance that I do not like and that are his biggest weaknesses and that is his distribution of short passes, obviously he can give good crossings, but regarding his short passes it is very frustrating to see him, Lisandro Lopez could have scored more goals if Lautaro had better accuracy in the short passes, and also more calm making them. And the most important thing is that he himself recognized the other night vs Cruzeiro that weakness, his short passes are very weak, without much precision and made at the least opportune moment, so I think that his SPA should be rated between 71-73. I hope that in Europe it can improve in this aspect since it is something that limits its usefulness into attack. 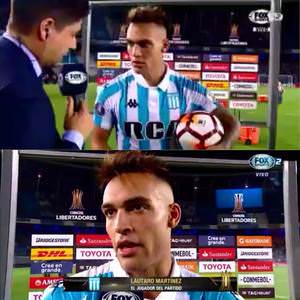