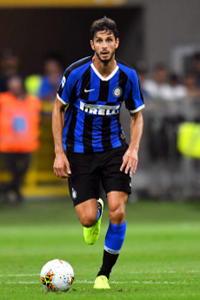 i personally think that guys like pure CBs should be rated way differently in terms of Stamina.
i remember my tests with Terry at 84 STA,he ended his games averaging a 60% full of the stamina bar. and in Pes a player does not tires until he goes under the 50% mark.......so imo 84 should be a world class value of stamina for a CB........anyway this isnt a suggestion for his own value....
Saving Private Adrian

But then again...most CB's in reality don't tire easily. Most subs aren't made for tired defenders, you know. And based on the standards of this current state of the ladders, I feel no need to punish this kid who hasn't missed a minute for Bari this season.

Uhm I dunno, but DS/DA seems a bit too much for him...plus Tact. dribbling...
Top

Did you watch the Catania match? It was unbelivable. He was making the worst 1st touches, and then getting under pressure and dribbling out of it. He did it like 5 or 6 times. He is mainly strong on the ball but he uses tactical dribbles despite not being especially good at them. His ball control is definitely better than Silvestre(74), and the Tact is an idea or an accurate tendency...it doesn't make them better. In face it will make him try more tactical dribbles which could result in turnovers.
"The Recoba Effect"
Top

Here are some thoughts from lo zio in response to Milanista wanting Milan to get Astori or Demel:

young, tall cbs, with world class potential, who could possibily take nesta's place when he retires...... there are just a few options....
pique and evans are not on sale.... kjaer is probably gonna move to england (it seems liverpool is more likely than man utd).... besides he's too expensive for milan... ranocchia and bonucci are much cheaper right now (and i'm starting to believe they have even more potential than kjaer and evans).
bocchetti? yeah very promising, great potential, but those 2 bari cbs are even better, and unlike bocchetti, they're probably gonna leave their club in the summer.

unless the whole world is going nuts, there's gonna be a european-wide war this summer to get ranocchia and bonucci.... and if milan doesn't at least join the campaign and tries to get 1 of em.... that'll be one of the biggests mistakes galliani ever did (and it's not like galliani didn't make big mistakes in the past few years).

I could use help with these guys stats...
"The Recoba Effect"
Top

I never watched this guy live I think but one thing that does surprise me a bid is his relatively high DA and below average technique. Hell, SPA, SPS, FKA and Curl could do with a standard update too.
I'm against you
Top

That was based on the bit I got to see him. His 1st touch was AWFUL, getting him into trouble...but then he was dribbling his way out of trouble. That is why the low Tech and high DA. His short passing was really bad from what I saw, and I don't know if I could confidently put him above anyone.
"The Recoba Effect"
Top

and what about FKA and Curl? I thought we raised the standard there.
I'm against you
Top

Yeah, I don't know. Whatever the standard is...he should be at the bottom of it

jmg721 wrote:Yeah, I don't know. Whatever the standard is...he should be at the bottom of it

I'd say generally FKA should be in the mid 60s and curl high 60s at the very least. Every player can curl the ball atleast a lil bid afterall

regarding his DA/Tech... he sounds quite Nicolita-esque the way you put it but I'm still unsure if a 8 point gap is really necessary. I leave it up to you though

on a sidenote: This SPA/SPS would make him one of the worst passers in the database

He is in the same passing ranges as Astori

Maybe they both could be raised, but I can't go too much higher.
"The Recoba Effect"
Top

well... make up your mind because this could affect the ladders in my league as well

Well, he looked good vs Fiorentina....and then tore his knee

Having surgery and should be out for a long time.
"The Recoba Effect"
Top

jmg721 wrote:Well, he looked good vs Fiorentina....and then tore his knee

Having surgery and should be out for a long time.

Maybe his season is ended, damn! He was maybe the best Serie A defender this season!
Top

you should give him a final update and then close this thread for the meanwhile imo. It'd be unfair to disregard his latest performances and let the case rest like that
I'm against you
Top

jmg721 wrote:Well, he looked good vs Fiorentina....and then tore his knee

Having surgery and should be out for a long time.

Maybe his season is ended, damn! He was maybe the best Serie A defender this season!

Do you think he was better than his partner Bonucci? What do you think is wrong in comparing their stats...as I did them in comparison to eachother.

Will give chance for comments on the update...and then I'll lock it till he returns from injury.
"The Recoba Effect"
Top

Will give chance for comments on the update...and then I'll lock it till he returns from injury.

did you update just to make him better than Astori or did you have these specific numbers in mind? Just wondering. Also I think he's quicker. Both TS and ACC. Versus Roma he managed to lose possession of the ball from the halfway line to Vucinic and then chase back after him. Watched it a while ago but for me he was at least bit more faster than Totti. Too bad he won't be facing Inter on the weekend.
Gotta change my shirt, it's sticking to me. I'm sweatin' like a cunt. Don Logan
Top

Rfuna wrote:did you update just to make him better than Astori or did you have these specific numbers in mind?

I actually spent a lot of time looking at Astori, Ranocchia & Bonucci's stats along with the current ladders in making these updates. I improved Astori as well.

You mentioned the speed stats, and I had a problem making him any higher because Bonucci should be higher than Ronocchia(I'm pretty sure), but I wasn't comfortable raising Bonucci any higher without seeing him more. But him being on par with Astori in speed...what do you think. I guess also we should factor in his amazing height...gotta have some effect on slowing him down.
"The Recoba Effect"
Top
Post Reply
264 posts