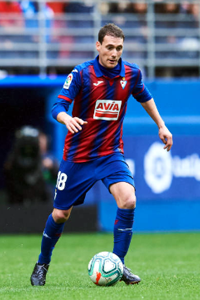 cristoforo have a number 20
Top

chedl wrote:good marking and good long pass against Perú: http://youtu.be/R0Rfkreqfvw?t=1m29s
He undoubtedly deserves a update, has changed quite his style of play, now is a '5' of mark, is not the mixt midfielder of 2011/2012. I hope see him in the Sudamericano and be able to give him a update.

Have anyone followed him during the World Cup Under 20? He completed an awesome performance, he seemed like a veteran inside the field, nice long passing skills, very good contribution both in attack as in defence, really a key player. He moved the threads of the team.
Now Peñarol has offers by Inter, Sevilla, Tottenham, etc. I hope he'll stay in here until end of year, at least.
"Serás eterno como el tiempo y florecerás en cada primavera" Club Atlético Peñarol
Top

he moved to Sevilla CF: