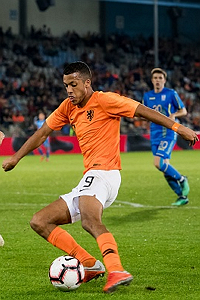 by čale
isn't he a bit weaker and a better placer of the ball?

by Fides
Interesting player. Isnt exactly a wizard on the ball (needs quite a bit of space) but pops up in the box to score quite often for such a young kid.

by RasniPantela
I think his body balace should go down one point , and his dribble speed should go up 1 or 2 points. Someone agree?

by mr.Boss
He will join Ajax : https://www.facebook.com/photo.php?fbid ... =1&theater

by Fides
I think he is a rather smart offensive player and would argue that his ATT should be close to 80. His passing game and TW need to develop (especially to perform at Ajax) but his directness, quickness and strength (for a teenager) are impressive.

by Roy
I raised his speed to a really high value. Hear me out, he probably needs this value, he's really really fast, he can just run away from defenders and leave them behind so easily.

by KeyserSoze
I guess he needs Goal Poacher, since *Lines has the same effect in game for new gen.

by Fides
Quite an interesting statistical analysis here:

"Playing for Groningen, Zivkovic had a hugely impressive debut season, for a 17 year old. His performance in front of goal was elite, his performance in terms of passing, dribbling and defensive contribution was, well, nearly absent.

In terms of radar surface, Zivkovic earned 3.5 stars, and should he add more passing to his game, or more dribbling, or some defensive work, he should rise in terms of stars. Still, for a 17-year old, this was an elite season. Now, how to put this ‘ for-a-17-year-old’ thing in our stars ranking?

Well, quite simple actually, by comparing a player to his peers, rather than to the full reference database.

The silver stars compare a player not to all other players, but only to players of the same age, or younger. There are just a handful of 17 year olds in the database, so I’ve set the lower limit to 18. "

by Fides
His statistics for the Jong Ajax (playing in the Jupiler League (the 2nd level of the pro-football system in NL): 10 matches, 9 goals. Scoring 1 goal every 94 minutes as a 18 year old. His finishing is very good and his runs are very smart for such a young player.

by Roy
I can see already that he's potentially just as good as Milik and already miles ahead of Sigthorsson. De Boer needs to field this guy fast.

by Fides
I agree that Zivko needs to be used a bit more. Especially in games were Ajax has some space (like last weekend vs Heerenveen). I think his ATT and RESP should be higher.

Fides wrote:I agree that Zivko needs to be used a bit more. Especially in games were Ajax has some space (like last weekend vs Heerenveen). I think his ATT and RESP should be higher.

by Shollym
Need For Speed

by anOKguy
BW should be fixed, delete my comment after
All times are UTC
Page 1 of 1
Powered by phpBB® Forum Software © phpBB Limited
https://www.phpbb.com/