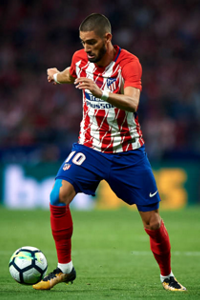 Same against Arsenal with Monaco SMF? Considering how direct he is and his goal output this season, isn't he more of a winger? How do you guys determine whether a player is a SMF or a WF?
Top

The same reason you determine if a player is a DMF or a CMF, or a CMF / SMF for that matter. They are just different positions and totally different roles. What the player plays like is a different story. Atlético play with a 4-4-2 and Carrasco plays as SMF, albeit an atypical one due to his WF nature and aggressive style. A SMF is not a winger, a SMF is a combinative side-preferring midfielder who won't be trying the darting runs, cut ins and crosses a WF would typically attempt. That's a generalization of sorts and I insist each player plays diferently, and Carrasco is a WF playing as SMF.

Sigh, time has proven me wrong. I should have seen it, but he is not even yellow attack. He's got everything really, dribbling, shoot, passing...but he just can't fucking finish a play. One too many dribbles, wrong decisions, shots that don't hit the target due to poor timing... He had some amazing three months, but he's yet another case of a player who can be so hard to rate if you don't watch him consistently.

He look slow than this set
Top

I have given him an overhaul. There is so much wrong with Carrasco...almost as much as there are good things. Sadly it's easier to find yourself watching the erratic, selfish and shallow Carrasco we are enjoying this season. He's got everything to become one of the best wingers in the world, perhaps TOP 3 material but why does he try so hard to suck so much? Like, he could be like PSD's Classic Futre really (set wise) but I see a lack of concentration in everything he does that basically makes him look worse. One of Carrasco's biggest problems is how he usually just takes 1 second too long...usually you'd say that's bad form or something, but I have seen him like that since the very first day. Somehow, even when he's on form, scoring, assisting and being a threat he still looks like he's not quick minded enough. Too bad because he won't last long like this, I don't want Carrasco to become the new Cerci.

Fixer wrote:... he could be like PSD's Classic Futre really (set wise) but I see a lack of concentration in everything he does that basically makes him look worse. One of Carrasco's biggest problems is how he usually just takes 1 second too long...usually you'd say that's bad form or something, but I have seen him like that since the very first day. Somehow, even when he's on form, scoring, assisting and being a threat he still looks like he's not quick minded enough. Too bad because he won't last long like this, I don't want Carrasco to become the new Cerci.

I really perked up in attention when i read this comparison, because i've been trying to watch alot of paolo Futre for the last two years. i can't understate just how phenomenally talented i think Futre is, i think he's the greatest dribbler in portugal's history, and had already showed, not just hypothetically having a theoretical talent level, but showed a technical level that indicated he was as gifted if not more gifted than even one of the best wingers of all time in Arjen Robben.

I have a notepad with example's of Futre that i've been compiling for a while, but i've not been able to be satisfied enough in how much i've watch as to say anything making any solid suggestions.

when i first noticed Carrasco, i was really impressed with how smooth he was on the ball, and much speed he could carry and use that speed on the ball with his smoothness to really be dangerous when dribbling forward. i think i actually gave him the inital bump to 89 DS? But while i was very impressed by Carrasco in alot of areas, i didn't think he was approaching that Futre level of greatness? i actually haven't been too surprised by how he is a bit less successful now, because i think he is technically skilled and has alot of speed, but is not really complete like you say, not a great decision maker, a bit too one-dimensional, though very gifted in that dimension of attacking.

I have to add that i haven't watched alot of Carrasco since when he broke out, but has he improved that much, or has he shown that much more than his break through season? The last i saw of him was a few monthes ago and i didn't think he had progressed that much honestly. I really liked Carrasco and i think he's a great winger, but the Futre comparison really surprised me. i'm really interested in what ways you think Carrasco compares closely to Futre, or what kinds of qualities he could reach a higher level where you think he could be Futre like.
If you don't put effort into your post, i won't put effort in my response.
Top

. It came due to these factors and since I didn't want to give it more importance than the comment I'll be short:

a) played in the same team
b) WF who are specialized on dribbling above anything else
c) both known for having certain issues that hold/held them from becoming even better and improving in certain aspects they do have potential in (shooting and goalscoring ability). Problem being Futre was better than Carrasco, whom will be done for in no time unless he shapes up

The comparison was meant to show the two opposites, Futre as an idol, Cerci as a meme. Carrasco can approach either, he'll never be as much a meme as Cerci is no matter how bad he is, and he'll probably never be like Futre.

ah i see what you mean then. now that you've brought up futre i may as well post the notes i'd been gathering, as i'm not sure when i can go back to working on him; maybe you'll see why i was really interested in that comparison and why i rate futre so highly.
If you don't put effort into your post, i won't put effort in my response.
Top

Are you shitting me, he's joining a fucking chinese club?
Top

one of if not the biggest waste of talent.
Top

Way too unreliable to be a starter for Atleti, but still uncomprehensible transfer for a laughable amount of money. However, I don't think he's going to waste or anything, it's not like his progression had been steady at all...his potential is huge and yet he has been making the same mistakes he already probably made for Monaco. Also, the recent case of Paulinho should already suffice to prove some players can just come back to the elite and make an impact, what Carrasco needs is to settle down a little. If he takes things seriously in China I see no reason for him not to become a wanted player by European clubs in a few years. He already is, and he's already a dickhead.

The only real concern for him with this move is to see if Robbie Martínez will select Carrasco as part of the Belgian squad for 2018 World Cup. He will have to work his socks a lot in China. Otherwise, he will seriously risks his already damaged chances to play the tournament. This doesn't apply with Witsel, since he's been a steady performer for Belgium, regardless of whether he plays in China, Russia or Portugal.
"Willy Wanda is Chinese!!!"
Top

Wtf this transfer, is he stupid or what?
Top