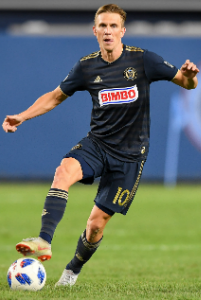 The contract probably hasn't been signed yet but it really looks like a 99% done deal. If it falls through, I'll move him back immediately.

Loan ended and went back to China. Read that Philly have no interest to replace him with a player of equal skill, they played a nice possession game last season, the culmination of a multi-year project of building a squad whilst spending practically no real money, and the team started to gel and play really well since May till end of season, getting quite a few "upset" wins where they smashed supposedly better teams - honestly the team deserved another season to perform. But they've already moved Rosenberry out and new director wants to abandon the possession style, most likely Medjunain will leave too then, the also sold Epps to Red Bulls.

Regarding Dockal, nice AMF controller, drifts to the flanks often to open the middle for others to fill, so that he can drop in a measured cross. His through balls are far from spectacular, but he does/tries them consistently. Shooting is possibly worse and maybe I was too lenient. Speed might be worse, not sure, he uses what little he has well, but its not a big facet to his game, probably fine to leave him as is. Touch is heavy sometimes maybe needs to be lower. WFF maybe could have stayed 6 - very good on left foot but not outright a near two footer...Loses his composure sometimes when things go against him and picks up yellows.
Top
Post Reply
3 posts • Page 1 of 1