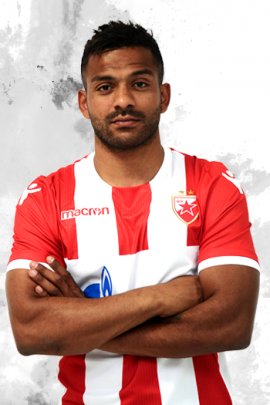 He reminds me of a two footed Aaron Lennon, maybe a little slower. Initially this set is pretty good for Ebecilio, but you may have underrated his speed a little. I'd say TS 83 ACC 84/85. Also his MENT should maybe be 80/81 he's really a hard worker backing up Daley for the most part.

WFF and WFA should both be 7 imo. He uses his left alot, take last night for example 2 good left foot crosses for EL H chances.
The perfect combination of technique, insight, personality and speed.
Top

I always wonder why TS is underrated in the Eredivisie.
Top

Aaron Lennon? The only similarity I see in them is their somewhat dangly dribbling style. His touches are very loose and open but he can move around pretty well with them. Bit of a weird player comparison though, as Ebicilio doesn't house extreme speeds and isn't solely a speedster either; his game is more all-around than Lennon's at this stage already I think.

Agree on the speed ratings, he's shown some functional pace over the first few yards. He always gets past a marker on a combination of good, raw pace and trickery. His Mentality is so far fine, I think. We could always revise that later, when we see him play more often, but I don't think he has displayed that kind of work rate just yet. He sticks back now and then but he will do that with a 79 too.

As for WFA and WFF, 6's are fine for now. 7's suggest a near complete two-footedness on a player, which isn't the case with Ebicilio. He quite certainly prefers his right leg and whilst his passing is good enough with his left, his left isn't as accurate as his right foot.

Paddy wrote:I always wonder why TS is underrated in the Eredivisie.

Care to elaborate on which you players in specific you'd feel are underrated then?
Buon compleanno, il pibe d'oro.
Top

It's more of a physical resemblance than playing style, The dribbling style and stature.
The perfect combination of technique, insight, personality and speed.
Top

Well I would say he is (clearly) slower then vd Wiel (in his normal fitness), Sulejmani and Anita. And I think Eriksen might be quicker aswell, so thats how I came to these stats for TS and ACC. He usually passes people with his feints and agile, combined with some pace.

@answ3r: Yeah, well its difficult. 7/7 feels like he should be almost perfectly 2-footed. And its clearly that he has the tendency to use his right for almost everything. I have to agree that his crossing with his left was good yesterday, but before I would give him 7 I would like to see more running-crosses with his leftie...


To be honest, apart from his skintone I dont really see the Lennon comparison lol
Top

OK, lets leave his stats as is and give him a little more time to show what he's got.
The perfect combination of technique, insight, personality and speed.
Top

He looks a bit heavier then 70 kg (and maybe BB: 76 is underrated aswell), but hey....lets wait a little longer
Top

Thanks for the response! Hmm, I actually feel he mishits the ball to often....that he hits it on the outside or inside of his feet to much and the ball just rolls towards goal (or should I say the backline) without enough pace. 73 might be a bit harsh for somebody who scores 2 matches in a row, but I wanna see him do this more often, because he takes a lot of tries at goal, but until this week he was rather unsuccesfull.
Top

Same thing yesterday. Awful amount of shots tried, but never he hit the ball cleanly. His aggression seems to be in need of a raise. When in possession of the ball he always goes for goal.
Top

It looks like he does mishit it a bit. But maybe he just has a funky shooting technique, either way his rating is fine for now i think. As far as his WFA/WFF I have said previously he should have 7 for at least WFA because he is very adept with his left.
The perfect combination of technique, insight, personality and speed.
Top

Yesterday again some tries, but no really dangerous one.

I feel his biggest strength is his mentality, confidence and drive. He keeps on going and trying and he is never afraid to beat his opponent.
Some suggestions:
BB: 78
STA: 82
AGG: 84
MENT: 80
TECH: 81 (so 1 down)
Top

Any opinions on Lorenzo? I feel his SP could go up, because he can smash them, but rarely hits the target. Apart from that I guess most stats seem fair to me. His TS/DS could be 1 point higher aswell maybe....
Top

Agree with raising his SP. His shots aren't as weak as a 79 makes them and I even think it could come up to a 81. He has good power in shots but like Fides said, they are painfully inaccurate (I'd decrease his SA and ST by one point tbh).

His TS is fine for now if you ask me though his ACC is underrated. I have him on a 84 myself though maybe some will think that's too high but yeah definitely deserves a raise there. And his DS is very harsh too. He's a quick player (on the ball) but his current TS/DS combination says different. He doesn't lose as much pace on the ball as a 81 would suggest. I have him on a 84 in my OF.

Updated:)
His SPA/SPS/LPA could come down a little (alll -1/-2) aswell maybe?
Top

His ST seems a bit low at 72. His first goal against Excelsior definitely had more technique than 72.

And he makes good runs and is often available to receive passes in an attacking position, so perhaps his Attack could go up or maybe his TW a tad.

That shot got deflected and was kinda lucky to go in I think.:\
Top
Post Reply
51 posts