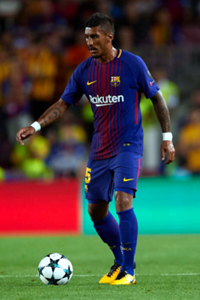 Regardless of how the move turns out for everyone involved, his signing has probably had more to do with shady corporate interests (Barça's president, Bartomeu, is involved in corporate deals with Evergrande) than actual footballing needs. There's talks Valverde is interested in a 4-2-3-1 system. In that case paulinho would be a good reinforcer alongside busquets, while having Dembele and perhaps coutinho on the sides with Messi in the middle and Suarez on top. The main grievance is of course that Barca haven't been able to secure the "right" type of midfield players to take over xavi and iniesta, while real Madrid have secured the best midfield talents. The board of Barca are not football people, they are tradesmen with a complete lack of character and long term planning as it seems. I have never seen anything worse.
Top

He's a scoring machine, really...he scores with such ease in Tite's system, his attacking positioning is just awesome always in the right position at the right time. I wonder if he does need that level of da tbh, he's so sloopy on the ball, he miscontrols a lot the ball while dribbling and he just carries it with enthusiasm, leg force and speed over distances. Aside that, I don't think he does needs that high level, sometimes he seems like whites tbh...same with his 1st touch, he's so damn incosistent at it...sometimes he looks like whites as well. He turned in another kind of player since a couple of years, and Tite's system is just what he does need to be great.
Top

Hes more than proved the people who didn't watch him wrong, he's even surpassed people who were for the moves expectations. Guy is a legitimate beast, a great addition to Barca's squad, brings so much energy and movement, smart simple plays and a real offensive threat off the ball, something they have really needed coming from the midfield.

I'd like to limit him a little more though, maybe highest of greens from SPA? Less lpa, I know I was impressed by his passing years ago, but not so much now, and his play at Barca is so simple, I think he looks a bit too well rounded like this. I'd drop def down, good but not outstanding, kinda clumsy but his energy and determination more than makes up for it. Feel his da and tech is bare minimal too, but he knows what to do so, for the most part, it's not a problem.

is exactly that, I didnt think that he would be real positive for Barcelona but he surprises even those who saw potential real chances of giving something to the team.
I really like the suggested values, but ​​dont think that his similar as Rakitic, Modric or others CMF close to 63-66 zone. Not only just because of this but im put his def be a little bigger than 65 - close to the 70's - something like 67-69. I was surprised about his SA had not been suggested an addition, imo its always being imo one of the main quality since Corinthians.
Another factor I wanted to suggest is response, his tactical notion of offensive move and positioning aggressiveness is insane, even more so if he thinks he's a cmf - imo a very high worthy figure - but that would totally affect his defensive participation in interceptions and aggressiveness in tackles and that wouldn't be real. He is agressive and has a nice concentration for interceptions, aggression as well but not necessarily in proportion to what response is/influence on attack. 82 would be the best value? I would leave higher but it may not be something replicated correctly
What is the best way to replicate his off-ball moves at the top tier level without influencing a possible and not actual defensive feature?

Anyway, I had a very limited view on hiring him and although I did like him, I thought it wouldn't have as much impact for the Barcelona just as he is having.
Top

big difference in how simple passes can make so much difference in that team, he keeps on running, playing off ball most of the time, covering every part of the pitch, yet when he gets the ball he shows he has decent tech and is quite smart in his actions, simple 1 touch football, forward passes and running in the box are his strong parts of the game so far.
Don't you think he's bit stronger than 81 tho?
Top

this guy is an iron man.in his football career he only got injured by Charlie Adam for 1 month in 2014.His IT must be A.
Top JIN726 wrote:this guy is an iron man.in his football career he only got injured by Charlie Adam for 1 month in 2014.His IT must be A.

he is absolute deserve IT A
https://www.transfermarkt.com/paulinho/verletzungen/spieler/57229
The arsenal, a modern building. Rising Sun.
Top

good example today of why I dropped his def so much, mid was a mess with him rakitic/iniesta.
Top

pretty sure he doesn't really know when, why and how to defend properly, he's a typical box-to-box player, running around, not great on the ball, not great off the ball, his pure presence changed dynamic of how Barca played till they found their playstyle and recently Paulinho has looked like he doesn't belong there, I mean, he plays much less, but has no real impact in the game, doesn't offer that calm presence on the ball Busi provides, without Messi there to allow him to make his runs, Paulinho becomes even more limited as a player in that system.
Top

In a way, something similar happened when he played at Tottenham. I remember he had a somewhat decent start for Spurs because he was surrounded with the proper teammates. But when the team gradually experienced a transformation (either by settling from the injury list or signing/selling players), Paulinho became a useless squad player over time.

He's a weird-to-rate footballer, who has some utterly drastical changes of form, from being great to become a lost cause in a matter of a few weeks. He often has some huge momentum flows in both (overall) quality and time extension, if you know what I mean

That said, I'd probably lower his Form even more, to a 3. Probably Mentality has to be knocked down a bit as well. Set aside for his stamina and football instinct, I've never seen him as a player who has a spirited or deternined approach to the game in a consistent basis.
"Willy Wanda is Chinese!!!"
Top

Wouldn't his tw be well overrated with the current numbers? I say he's decent in support of ball possession but his true feature is being reactive, infiltrating and floating on the opposite side of the ball, in offensive moments. Also his shooting impresses me far more than his passing game.
Top
Post Reply
153 posts