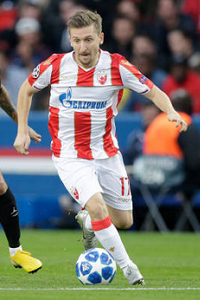 He was a great prospect but seems like he has stagnated in a massive way. He hardly ever starts for Werder, team that hasnt got many quality players, tbh...
Top

Some thoughts about him after exactly a year without an update.

-I still see him in a orange region for his agility but i doubt he is still 92. He can be easily at 90 same level as Lennon or Jesus Navas, maybe 1 point higher of both 91, but for me no 92.

-I agree with Maz3r in DA 84, he lost some touch with the ball and doesn't keep to close as he used to do. Thats is why he looks sometimes deficient on his dribbles.

-I think he still deserves the values for TS and ACC, but the one for DS, no more. Imo, i saw him a little bit lowest than last years, he runs at less speed with the ball on his feet. Also agree with Maz3r in the value.

-For his passes, i would reduce SPA & LPA in one point each, both are less accurate than it used to be, and for SPS & LPS i will them in 74 and 75, respectively. His passes are less dangerous, very often lack of power and sometimes lack of direction.

-For me, he shoots always were lack of power, sometimes he surprises us with a powerful one, but very strange. Sounds harsh but i will rate him at 78 in the aspect.

-I think he is less aggressive than other season, now he goes forward but lost the "intensity" that he has. Maybe an 86.

-Not sure on decreasing his TECH to 84, im fine with it. Taking account that his DA comes down radically. I will not touch it, and more that reason is the fact he continue showing a good ball control and first touch.

-Finally, i will reduce his TW to 76, i don't see he having a good understanding with his teammates, sometimes hidden from them, so he isn't a good alternative for a pass. Lost in the pitch.

I think that is all. With the rest of values i am fine.
...U dared to enter my world...

i don´t really get the update. For me it seams that he get worse and worse.
Especially SA is damn to high. It´s his biggest weakness.

Can you explain why he get this update.
Maybe i´m totally wrong.
Top

it`s the set by Interist - and I like how he moves, when I see a Marin in a good form. at all Schaaf doN´t give him much changes in the past and he has a problem with consitency but I´ve watched a lot of scenes from him from this season and he wasn´t that bad like the media sees him. just not so present like in the years before when he was on the wing. But I´ll take Krugers suggestions also to make another update. with some small tweaks
Don't bother just to be better than your contemporaries or predecessors. Try to be better than yourself
Top

i'm with Hayame on this one, his shooting is woeful at best, can see him deserving anything above mid greens for SA and low 70's for ST IMO.

Not to discredit Interist but the set looks like a classic one, Marin on his prime - Now, he is really far from that. He showed few good moments and a lot of poor moments during the season, so we have to rate him based on an average of his level - Not peaks not lows.
...U dared to enter my world...

Updated. I can`t bring back his old set but this is a hybrid set between latest suggestions, konami and his last performances. The old set is here. Feel free to post anything about it - I am open to suggestions.
...U dared to enter my world...

To Chelsea in the summer:

Typical Chelsea signing; a player who lost his form, in a position already covered by other players. SIGN A PLAYMAKER FFS!

to sign marin is, to sign shit. He had two good years at all and nothing more - his career is over, he`s done. and I don´t know watch Chelsea want with him, maybe he should carry the clothes of Terry and Lampard
Don't bother just to be better than your contemporaries or predecessors. Try to be better than yourself
Top

s-cobar wrote:to sign marin is, to sign shit. He had two good years at all and nothing more - his career is over, he`s done. and I don´t know watch Chelsea want with him, maybe he should carry the clothes of Terry and Lampard

what an unqualified bullshit of a comment. Marin needs better players around him with whom he's able to create offensive actions. After Özil left Bremen he wasn't the same anymore because Werder lacked congenial partners for him in the midfield. Another big reason for Marin's decline is Schaaf's system in which every player has to have defensive duties but Marin just sucks in that aspect and isn't suited for such work, he's a 100% creative player. Did you ever see a match of Werder over 90 minutes since 2010/2011 or only highlights? When Marko's on the pitch he always tries to create space with his dribbling but with only fighters, destructive or technical limited players around him like Bargfrede, Frings (10/11), Fritz, Hunt etc. around him most of his efforts are doomed to fail. And if that's the case he loses the ball and sometimes looks like an idiot because his style of play is always fraught with risk.
This season Schaaf and Allofs tried Mehmet Ekici but the turk hasn't really arrived in Bremen yet, sure they bought Junuzovic in the Winter's Break but the Austrian is easily to arrange in the above list of limited players. Despite the lack of a partner last season Marin was one of the better players in a desolate Werder squad that struggled to prevent relegation. Also this season Marko had a superb start in the season until september when he started a series of 7 injuries up to now with injury times from one to three weeks.
All in all I think this transfer is very good for all sides, Marin gets better footballers to play with like Mata, Werder a nice paycheck and Chelsea a still young player with a great technical potential that hasn't maxed out yet. I'm very optimistic that Marko will regain his former strength in a better team like Chelsea after two lost years.
Top

watch as he proves seb wrong

yeah, indeed lucky chelsea
great player this is and he's still young so probably he is going to get a lot better
Top

mmh i forgot to write that Marin is nothing but a winger but Werder plays with a 4-4-2 diamond system in which Marin is made into an AMF. It's not his position, he just feels not comfortable there, Marko needs to dribble from outside or to pass vertical. Anything else results in failure.

Prior to 2011/12 he was never injured but this season he definitely deserves a C.

Looks better! Btw, don't you think he can have *AMF ? In that position he played almost all season.
...U dared to enter my world...