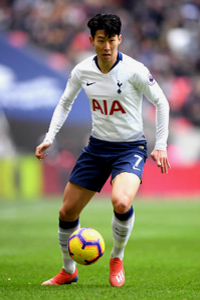 I have the idea that sometimes when he plays as a lone striker (CF) he get lost in the game and become useless for the team.
...U dared to enter my world...

Definitely needs a bump in TS. Being Faster than Nani, think he's 88.
I also think ATT and SA, SP can be a point higher. Especially SP, he is definitely more than 85. He shows powerful shots.
Top

A good 85 will be more realistic i think.
Top

The only great player in South Korea. Maybe needs an update in speed stats?
Top

He toyed with the algerian defenders the other day.

Think his speed stats are bit underrated though and also KP. 87EP, 90TS and maybe 86 for KP??
Top

Add WG, not sure that AMF should stay, and maybe Left Side only?
Top

Am I the only one who thinks his shots are bit underrated here? His main strength is shooting skills, both accuracy and power, which I suggest 85 and 86 for each. For DA I don't think his touches are as much sophisticated as 84. 84 is the same value as Bellrabi, who shows better skills than Son, and whose DA value is underrated. Rest of them is Fine.
Top

His position by default should be either SMF or WF for sure.
"Willy Wanda is Chinese!!!"
Top

He plays sometimes as CF for Tottenham: http://www.transfermarkt.co.uk/heung-mi ... eler/91845
Top

His name is in the wrong order.
The Hangul symbols of his name (손흥 민) in romanization are as Son Heung-Min.
That's just the order, but it is the correct way to romanize these Korean symbols.
Please, fix this. He's too weak with the PES 17 stats (Body Control and Physical Contact), even more weak than Neymar
Top

He's having a good season, honestly I don't see any major weakness in his skillset except for strength and aerial game. His crossing his basically non-existent but that's not really a weakness of his, he's not a wide winger, more like an explosive, hardworking inside forward.

He's very hardworking both in attack and defense, he could probably use an upgrade in AGG and DEF awareness.

His body control is probably in the low 80s and is PC around 70. He's not one to commit into physical duels, he's more about speed and elusiveness.
Everyone knew it was impossible. Then came along a fool who didn't know it, and he did it.
Top
Post Reply
80 posts