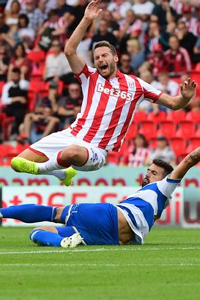 Short highlight video of some of his goals for Wigan.

Highlights of the all the goals in the MK Dons vs Wigan replay in which he scored two to turn the game in Wigans favour.

His shot values deserve an increase. 14 goals is something better than SA77. And he's flying to USA right now, to join the United's pre-season.
It's easier to win when you only need to score once.
Top

no they dont
Top

Watched him playing a fair amount of times.

Shot Power can rise a number of points, and Long Ranger card can also be added. He has such a powerful shot, and he shots very often from distance.

SPA can rise to 79 or even 80. In a Champions League game in Fergie's last season, he showed brilliant passing, short passing especially, for his age.

CF position should also be added. Correct me if I am wrong, but at Crewe he used to play as CF. Even right-now, he plays there sometimes for United's U21.
He is just like Rooney, able to play both as a Striker and as a Midfielder very well!
Top

Very aggressive player that goes for killer passes and stuff he really probably knows he shouldn’t try but still does anyways resulting in a lot of turnovers. I would have attack at 70 since he still contributes, but is far less intelligent and capable than is currently rated at. Still not athletically gifted and I would probably lower sps to 73 as well. His shooting can be quite good but this is a bit too high for that. Low 72 or something fits more since he’s still well above average at it. He gets fouled a lot and has good close control that allows him to control the ball in tight spaces. Trying to watch more but these are the first impressions of how he is now.
Top
Post Reply
30 posts