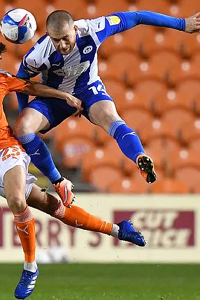 Seems he is off to APOEL probably so wanted to get his set up from what I last had on him.

Joe Garner is a really hard working player, but not one that scores much anymore. He used to be quite predatory, and he still tries to be, but isn’t very dangerous at the moment. He’s got a very good jump and good header and his defensive pressing causes a lot of trouble for the opposition. Overall, Garner seems a good squad player for his attitude and work ethic, but not so much for his current level of contribution.
Top

Garner is an absolute poacher, anOKguy was right.
His off the ball runs and responsiveness have been class so far and overall relatively really clever for the level of Cyprus. His finishing has not been bad either, really strong shots usually with good placement as well as decent headers. He works hard to track back in defence, as well, his mentality is really strong and he showed that he can be a leader at times.
However, there is not much more in his game than his poaching ability really. His link-up play has been mediocre most times, except maybe some good powerful crosses and cut backs from the right, and he has also experienced some fitness issues as well. When he was signed in January it took some time for him to be fit enough to play and now he has been out with a back injury for around a month or so, not certain if he will be fit in time to play any more games this Season.