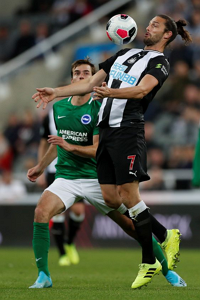 Its enjoyable, I have it. There's not too many changes though.

Why would you be against it? Having tested it in-game I think its far more of frequecny thing. Also, there's two types of tackling, one based on response and the other on defence. Without a high value in his defence the accuracy of his normal tackles will be too poor, while his on the spot tackles will be quite accurate due to response.
Top

As I've said, if you can get people to agree to it, I'll update. Provided I don't find some kind of hideous side-effect whilst testing.
"If you are first you are first. If you are second, you are nothing" - Bill Shankly.
"I guarantee fourth place" - Rafael Benitez.
Top

Its Andy Carroll, you're always going to see something hideous while playing with him. Also, who on earth posts in the Championship bar Softy, yourself, CK and myself?
Top

This is like the 2nd time i see him playing a full match, but what a match he had today, he scored 2 goals and assisted one.
He was VERY strong, in the air he was unstopable, he created many chances by his head and scored one, his second goal was with his week foot, great turn, from out of nowhere he scored the goal, he defends A LOT, tracks back, his passes are pretty decent, he was everywhere in the box, he made a chip inside the box and 'Hines' scored, there was also a chance where he made a great run on the side, good pace with the ball, but i was impressed by his assists, he fights for the ball, good teamwork,brave, but his main strength was his HEAD, he made so many chances in the box with his head, he used to come back for corners, he helped the defenders a lot, thanks to his height, his 1st touch was great too.
Top

And His Passing Ability is better than this.
NEWCASTLE UNITED
PROUD TO BE TOONARMY
Top

I agree with you he is better than Ranger, but there is always the possibly I overated him when I made the stats....
Top

I agree he is far better than that. Maybe:


Too bad his curve sucks


Too bad his curve sucks

His SA don't seem to be reach 79. He is not accurate striker.
I rate him 78 for SA IMO.
NEWCASTLE UNITED
PROUD TO BE TOONARMY
Top

Given him an update, but his SA is fine, he's hardly a prolific scorer with his feet, is he? His shots generally don't have a great deal of direction and are often struck straight at the goalkeeper, in fact, I could even see a possible one point decrease in SA.
"If you are first you are first. If you are second, you are nothing" - Bill Shankly.
"I guarantee fourth place" - Rafael Benitez.
Top

forgot his age he 21 now

I think his Defence is too high, maybe it should be about 47, also technique 79 is high his first touch especially recently has been poor.

I'm ashamed of myself for writing him off before the season started. He's certainly proving me wrong! Early days yet, but Header could be a bit higher. In terms of sheer power and range, he's better than the likes of Rooney although arguably maybe not as accurate, I'm not sure. Seen as I'm based in Newcastle for uni, I might go along to a few games this year, we'll see..
"DEBT IS THE ROAD TO RUIN" David Gill August 2004

I agree with you, though like you say its early days. Header could potientally come up to 86-87 . I also think SA and ST are underated slightly they could both come up by 1 or 2 points. Defence is also a touch too high.

Can't comment on defence but I'd take your word for it. Shooting should be left alone till around mid-season I reckon. His heading is definitly looking like it could reach the heights which you've mentioned though, quite easily in fact. He's miles better than Heskey and is only rated one above him at the moment.

p.s. Updated the first post with the famous number 9 shirt

Hmm, he's no quicker than your average Center Back really is he.. These speed stats are very generous in my opinion
"DEBT IS THE ROAD TO RUIN" David Gill August 2004

I wouldn't be against dropping his speed stats a couple of points.