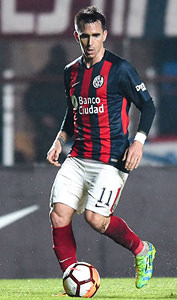 No LPA reduction? WFA is worse IMO, I forgot to say it

Damn! I forget it...yeah could be in 76/77 and agree about WFA...may be tuco/general suvorov can update him.
Top

this is what i call a true "betocarranceada"

Watched him vs Corinthians, he was probably the only one who tried something in attack in his team, running like a crazy, showing great commitment and specially speed in long runs. Aside that he couldn't do so much, played mostly in the left or at least it was my impression.
Here you have a pic with Palmeiras' shirt: His passing are fucking overrated, form can be even lower.
Top

i dont know if he is worst passer than acosta or acosta is worst, both have some complications to make good crosses when both are in the line, and looks quite bad about tw, he doesnt move at all, just switch positions with acosta to play as rwf or lwf. Something to remark is how good uses his weak foot, can manage well in double touch, passes and dribbles.
Top

People here are saying a great things about him, perhaps due the fact that he's been playing for the NT.. Thoughts about him, this set?
Top

He's not nt player and I guess he has never been, probably he was just called up sometime but i don't really remember. The guy is an useful player, when he played at Boca with Riquelme imo it was his best era...then he rolled around the world and didn't do good things, specially at Palmeiras. Now he was champion with Lanús but alternating between the starting lineup and the bench. He's fast and decently good on the ball, but I don't really know if he's currently this good. He can be useful in a less demandating league.
Top

He's played a couple of games, showed a decent cross with the right in the couple occasions, decent dribbling, which is mostly based on his DS and ACC, and nothing more than that. Against Ludogorets he really didn't do almost anything.. He's still not 100% fit but he seems kinda raw with the ball, perhaps he's lost a bit of his old agility. And I am not sure if we should keep Incisive Run anymore but we'll see. There is just one example of it in Lanus&Palmeiras highlights, it seems that he's changed his old style of play.
https://www.youtube.com/watch?v=hrVucLu-vTA
https://www.youtube.com/watch?v=mM6qJYy1Mww
From what I've seen, there is no way that he could replace Katai properly one day. Mouche isn't a game changer, tbh they are a totally different players and a different calibers.

btw he's played 5 games for argentina in 2011. and scored 2 goals vs venezuela, but the team was made of a home league players.
Top

He is playing such an awful, without any confidence. Slow with the ball, never doesn't use his right, isn't making any dribblings, he is really useless.. Even this set is quite generous atm. Maybe it would e better to put him on the bench, maybe he will be more effective in the last 15-20 for start.
Top

Loan will be terminated soon, he is going back to South America. An awful performances from him, this set is even too generous for what he's shown.
Top

Yes he is, can't remember a single nice performance of him here in Paraguay, not even in the Pre Libertadores, and we're talking about a smaller league in comparison with Argentina- Brasil. No idea oh what he can give to Banfield, shitty player always making unnecesary fouls and of course he plays with a yellow card behind his shoulders, perhaps a downgrade in DA, AGI, SP, MENT and TW could suit him
Top

Well actually Falcioni is a good coach to recovery players and I guess he asked him to replace Bertolo/Brian Samiento aside signing Dátolo. Well, until 2014 he wasn't bad at all, he was even a good player overall...dunno what happened after that...I've never liked him, talking about his style, but he was quite useful: fast, skilled and a decent crosser. Then his career went to the garbage, it's like his 4th team in 2 years, nothing good.
Top
Post Reply
129 posts