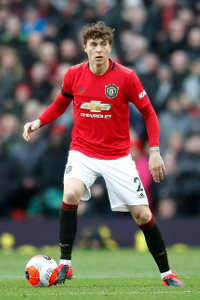 why u didn't create it at site?

Can you create the player on the edito? I can't do it, create player button doesn't work for me

He looks very good. Composed and calm, he was really good yesterday, he'll surely get a massive update soon.
Top

I think at the moment he is Benfica's second best CB, after Jardel. Not that there's a big diference in quality with Luisão, Jardel or Lindeloff, they are all ok, but Luisão has been injured for most of the time and he's no getting any younger, Jardel has evolved a lot and he is now at his peak, and Lindeloff is evolving and showing natural ability he has the potential to become a Garay level CB.
Top

He is a CB with a good technique, DA and BC are a little better.
KEEP CALM and HURRAY BENFICA!
Top

Great young player, i am sure he'll fit perfectly in Man Utd and the Premier league, the perfect league for him.
Top

He is a CB with a good technique, DA and BC are a little better.

Good points. Made a slight update before the tranfer.
Top

His LPA/LPS also looks a bit better than this. He's not exactly a "quarterback CB" (i.e. Pinpoint Pass), but he's not wasteful to this extent when delivering long balls. LPA and LPS look more like 74 and 78 respectively, maybe even slightly better.
"Willy Wanda is Chinese!!!"
Top

KeyserSoze wrote:His LPA/LPS also looks a bit better than this. He's not exactly a "quarterback CB" (i.e. Pinpoint Pass), but he's not wasteful to this extent when delivering long balls. LPA and LPS look more like 74 and 78 respectively, maybe even slightly better.

He's not bad, but i can't really see his long passing above his short passing, i think it's the other way around
Top

I read some crazy bid for him, he is really good? When i saw him i found a decent defender but nothing special
Top His LPA/LPS combo is defo better than this, as Keyser suggested even back in late 2016. I remember some really good pinpoint passes, but everything else is not as good as i expected. I was impressed by him at u21 euro and some Benfica games, but obviously this is something very different.

He's a very tight marker, he tends to leave the D-line and try to push the striker as far as he can, leaving the space behind. He also can be seen too wide, always very keen to intercept ASAP, Lindelöf is a very very 'individual' defender that doesn't care much about holding the position and keeping the defensive unity. His extremely 'enforcing' style is something that i don't like and his TW looked even worse than this at numerous games this season.

https://youtu.be/1BsMCotbOGM?t=26s - This is the typical example of how Lindelof like to play, veey close to the striker, very aggressive. Look how Matić dropped to cover the space.

https://youtu.be/1BsMCotbOGM?t=2m11s - here, he's a fucking left back for some reason. Another example of his positional unawareness and individual style. That fail with Alexis is epic too.

His very obvious talent in disspossesing is still there, potential is huge, but i think he's failing to handle the pressure. Some amateurish mistakes, like that one vs Huddersfield, bad communication and silly little things are for me the clear sign that he isn't relaxed and focused as he should be. Playing with retard like Smalling won't help him at all tho. 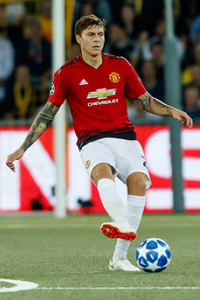 I haven't seen a shittier mentality in the prem in years. I still find my suggestions from previous account (ReX) useful, but i'd defo add the part about his mentality. Lindelof is a commited player, he really doesn't have any workrate issues, at all. But in any bigger games he's scared as fuck, no concetration whatsoever, his reactions are awful, and definetely everything is up to his awful psychological state in important matches for Man United. Yesterday against L'pool there was a funny situation when Mane (i think) tried some trick, failed massively and literally forgot the ball, but Lindelof, who would usually just easily take it and pass it, looked so scared that he failed to react, i'll try to find that.
Top

These stats make him physically imposing and good in the air. That is not the Victor Lindelof that I know.
Top
Post Reply
42 posts