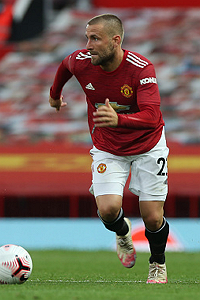 anOKguy wrote:Alright I’ll be brief since not been in much of a mood to write. He’s a very solid player and actually really consistent despite all the absences with injuries, but needs a few tone downs.

CB should be added as a second position, he’s playing there solidly in a back 3 and he’s got defensive chops. Not what he had promised to be of course, but he’s really a very solid defender. That being said, 72/73 defense is more than enough for him. Dribbling would be potentially +1 DA to 75 and -2/-3DS to 76/77. He’s got actually quite nice control and can make good moves and control in tight space better than a ton of others at the position and a solid number of midfielders... but I’m not really strong on the increase as he’s in between the current and the +1 but wanted to throw out. He is slower on the ball though for sure enough to note. His crossing is accurate but really tends to be floated and lacking that speed needed to get where it needs to go. I have 76/77 LPA and 73 LPS in mind, that highlights the solid placement but lack of speed with which most his crosses are sent. TS 82 and ACC 81 paired with AGI 74/75 feel needed as well. WFF to 3. Aggression to 75 is correct given his more reserved nature and I agree with the slight increase in short passing but still would likely do 77 SPA (although that’s a slight difference) and SPS maybe 75/76 range personally. Finally, the 69 attack is a good number.

Order is all sorts of ugly and my apologies for that, a bit scatter brained going back and catching other things worth noting. He’s a solid LB, but can’t be relied upon to stay fit and injuries have ravaged his insanely promising career. He had a very respectable 2018/19 and parts of this campaign, but again you cannot put any trust into him being the week in and week out LB. Brandon Williams is a tough kid with a huge heart and scrappy edge to his game... but he has massive inadequacies when forced to bring the ball up the left flank and when he’s targeted by a possession oriented or even just an incisive team like what Sevilla did to him. He’s fine when it’s just nonstop running and he can play on the break and use his athleticism. Being deployed on the side of his weaker foot doesn’t help. I’ll copy this into his thread in a few. Anyways it’s Shaw and Williams currently with Fosu Mensah getting a little peak. That’s definitely not good enough. Shaw being able to start and then play as LCB or LB is good, but he’s not the guy for a full season. United will need to address this. If he could stay healthy, it wouldn’t be a big need. However, with his track record the recent fixtures since his latest injury are all the more proof that this is something pressing if they’re to maintain top 4 form into the next season when hopefully a few more teams rebound into better form and give us some more competitive and high level UCL competition to watch in England.

Totally agree with this post. I believe anOKguy's suggestions should be implemented for his Set.
Technically he is a tidy left-back who can be relied upon to control and pass the ball without major mistakes, however in the final third he has obvious limitations to provide top class end product as his crossing is not as incisive as it should have been, and as a Full-back he is not as attacking-minded as he was before his major injury in early 2015-16 Season. His DA should be be increased as anOKguy said, but maybe a bit more to like 76? Also does his Technique require any upgrade even a small one? Finally, does anybody think his Stamina (which is still good of course) should be decreased a bit to like 86 because of him frequently missing games? I totally agree with the rest suggestions.
Top

Nowhere near 76 for spa lmao
Top

Positioning is all over the place today, one minutes he’s a LWB then LCB, I mean for one of the spurs goals he was to the right of Maguire for some reason edit: and again for another goal he’s abandoned the lb area
Top

Since Telles came to the team, he somehow improved a lot, I think that transfer motivated him. He's been consistent, quite solid in defending, made some good overlaps to support his LW, and his crossing looked better, even sometimes he took a corner with decent accuracy.

Both his attack and defence seem 72 to me. Stamina looks +2 than this to 88, LPA to 81, and curling to 75. Hopefully he'll stay fit so he can compete with Chilwell for LB position in England squad for Euro 2020.
Live life for the moment, because everything else is uncertain.
Top

7Jonathan28 wrote:Since Telles came to the team, he somehow improved a lot, I think that transfer motivated him. He's been consistent, quite solid in defending, made some good overlaps to support his LW, and his crossing looked better, even sometimes he took a corner with decent accuracy.

Both his attack and defence seem 72 to me. Stamina looks +2 than this to 88, LPA to 81, and curling to 75. Hopefully he'll stay fit so he can compete with Chilwell for LB position in England squad for Euro 2020.

Surprisingly, his crossing and set-pieces have been absolutely amazing this Season. His Response is arguably also much better than this, he is probably one of the best defensive Full-Backs in the League.
Shaw is just so underrated right now, because when he was a youngster prior his injury he was expected to be an absolutely attacking minded world-class Left-Back, however after his injury (and maybe a couple of years after expected) he has turned out to be a world-class Left-Back anyway, but a defensive minded one, so some people think that he is a failure because he has turned out to be more defensive-minded than expected. However, at 30something million he was bought for back then, he has been playing like a bargain for the third season in a row now.
He is so so tidy in possession as well. I can easily see his DA and Short-Passing being better than his Set.
Top

Assisted two goals when United destroyed Soton 9-0 last night to Wan-Bissaka and Cavani with beautiful crosses. He also just played in the first half.

A boost for him maybe? He's been incredibly good so far at the left back and did excellent job. His LPA, LPS and curling are the most needed to get a bump, his deliveries were so accurate and terrific. He created 7 big chances this season, 2nd most for defenders, only Robertson who created more, and mostly they came from crosses. His injury tolerance could be back to B too by the way. Also his form to 5.
Live life for the moment, because everything else is uncertain.
Top

He is due for some upgrades for sure, never thought he would improve at this point of his career.
Attack, DA, Lpa, Curl and Body Balance/PC/BC all need a raise
Top

God, he changed a lot. Not as rapid as 5-6 years ago, but become smarter to make the decision. He's so good, obviously better than this, been outstanding this season. He successfully improved in almost all aspects, been incredible in both defending and attacking. He's becoming much more aware of his opponents, his tackle has been improved massively, his concentration has been better, his crossings become one of the best in the league, also great in supporting Rashford from the left side to create the danger. So overall he's been one of the best United player in this season alongside Fernandes and Rashford.