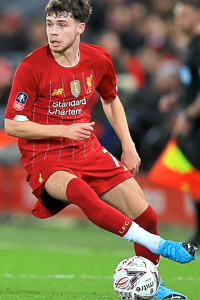 A solid SB prospect, he’s been getting more minutes since the addition of his set in January. First, he’s actually very good in the recovery tackles and he’s a solid 1v1 defender, but can be lacking with organization in the back line. Because of this and being young it’s a little tricky to rate as of yet his true defensive level. 63 should work to keep him at, but I’ve seen stuff worth higher. Attacking he is definitely better now. He’s got a good cross he can whip in and has been more aggressive up and down the flanks with his showings. Further, he’s very comfortable and effective with his weak foot and has played at LB. he can cut inside from the right flank and hit a good left footed cross and has nice swerve on the services. Those are the big notes, but a lot of stuff needing tweaks now that he’s in the first team picture and able to be properly judged about a year later. Will leave the numbers below: