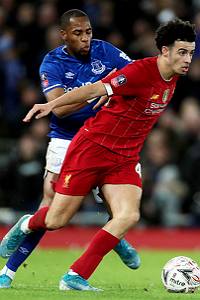 Nice curled shot against Everton. He surely deserves better shooting values...if he shown that Coutinho-esque goal consistently. Passing is good already. Might be the next Coutinho if given more chance to play regularly.
SEMETON DEWATA
Top

Since I made his set, he’s grown a ton. Top notch prospect honestly.
https://m.youtube.com/watch?v=uAKvtlRl2Dg Scored the worldy against Everton
https://m.youtube.com/watch?v=u7pcne5aZ2Q One of a few tunes he put Shrewsbury players in a blender
First thing to note is his dribbling. It’s real quality. I don’t think it’s an exaggeration to have him 84/85 in DA and 83/84 in DS already. His foot speed and technical precision is class. He definitely needs the turning card and shoulder feint. He can shake people from the jump and create that space needed to get away before having to use his technical abilities, which is crucial at the next level and shows that he is a smart player. I like his agility value now, but I would think it a safe bet to go higher. Shooting he has never shown anything like that Everton goal before when I’ve watched. He’s a passive shooter and not really putting power behind it. Something further to note about his dribbling is that he does not dribble himself blindly into trouble like many others his age do. He does so to eat up space, but resists the urge to just continue on and force things.

Next stuff to note: he’s a better passer and this could be the thing that allows him to contribute. Liverpool can stagnate from a lack of a spark to crack open the game, and this guy is really getting an eye for some of those passes. His dribbling opens up windows to make a really good and dangerous pass and he’s learning how to make them count. I would say his at 78 SPA at the moment and 76 LPA. can do these really cheeky chip passes as well as part of his array of passes and get a player in behind with a really well weighted ball that doesn’t carry fr into the keeper. Teamwork he’s upper 60s not bordering 70. Will continue to grow a lot it seems as he doesn’t drop off with the first team. Finally, would up his attack to 66/67.

Addition: I would tack on CM. He can play there and then break forward. I want to follow his defensive work more, but haven’t, anyone else seen much of it? Tactical dribble too is a must.
Top
Post Reply
3 posts • Page 1 of 1