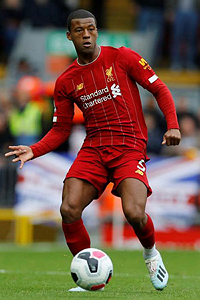 I'd give him a higher Jump and Technique, 82 and 81 respectively.
Buon compleanno, il pibe d'oro.
Top

But al the other stats are ok

1st post could be updated with the new set

A 72 for his LPA? Really? His crossing, alongside his pace and acceleration, is one of the reasons why he's arguably one of Europe's biggest talents, being able to make a goalscoring opportunity out of nothing.

His Aggression could also be higher, he goes forward with great gusto and moreso than an 81 indicates.

I also feel that he maintains a higher level of speed, and doesn't lose that much pace, when on the ball than the current DS value of 81.
Top

I'm always very careful though with such young talents. I feel it's better to slightly underrate them than put up a very impressive player and having hordes of people rushing in saying he's clearly overrated and needs to be toned down.

I don't think the thing that makes him such a big talent is his speed or crossing, it's moreso his overall vision on the pitch and his exquisite abilities in dribbling and passing. I want to show you some moments that, to me, define Wijnaldum as a player.

As shown here, his timing of a move is very accurate. He can see the holes in a defence with relative ease and knows how he can dodge physical battles by playing with quick combination-style that leaves defenders looking for the ball rather than the player. He can then utilise the space behind his marker, and his speed, to get away from the defender and open up space for another move (or finish).

This is Wijnaldum's best match up-to-date I feel, here he shows exactly what he's all about; creating space and being dangerous himself with the help of teammates. The 1-0 is a typical Wijnaldum-header really. The kid ain't tall but he can jump like no other, it reminds me a lot of Gullit really (though that may have something to do with his hair-do too

). The 2-0 also includes a brilliant lay-back by him, the commentator states it as intentional but in a post-match interview Wijnaldum himself said it was deliberately done as he hit the ball with the inside of his foot instead of the top bit with Fer positioned better in his eye-corner. The 3-0 is really brilliant from his part, taking up the ball and having a trademark dribble through 4 men before delivering it to the waiting striker on a silver platter.

My suggestions for Wijnaldum:

Agree with the above, and I dont this he is a WF*. I think AM*, CM, SM would be better for his position. I guess he can also play as WF and SS but I dont see him playing there actually.
Top

He's usually out on the right wing but has a very free role there and is able to drift inside etc. Although lately, De Guzman has been starting over the young Georgino.

It's a weird WF, SM and AM mixture. I feel Feyenoord play with a 4-5-1, with a left WF and a right SM; a more conservative midfield-role that enables the player to cut inside more, as the AM behind the striker drifts a bit further up and to the left.

Personally, I'd make his registered role an AM, with CM, SM and WF as secondary positions.
Buon compleanno, il pibe d'oro.
Top

I can certainly agree to those suggestions, and I think that he could also do with a boost to his Response as well.

Updated with my own suggestions.

I assume a 81 would be sufficient for Georgino.
Buon compleanno, il pibe d'oro.
Top

Updated Response to 81
I think we did a good job, the current stats represent him in every way

The only thing I am not sure about is his ATT. I think 77 is rather high for such a raw talent. Its higher then his teammates De Guzman and Biseswar where I think they all could be around 75/76.
Top

Fides wrote:The only thing I am not sure about is his ATT. I think 77 is rather high for such a raw talent. Its higher then his teammates De Guzman and Biseswar where I think they all could be around 75/76.

Hmmm.. I doubt that, i think Georginio is the one who could be over these two because he improved himself in positional sense(ATT) and the others are more of their ability to score a goal from distance rather than getting in to the box to score a goal like Georginio does.
EREDIVISIE SUPPORT
Top

one more thing, his BB is low for his size he can take some pressure, maybe 76 ?
Top

Really, he's not strong. There's a reason he tends to shy away from a physical battle with his marker, he generally always loses them...
Buon compleanno, il pibe d'oro.
Top

i know, and it's logical, what i m sayin is that he not that weak, besides with 76 he'll not Drogba-ésque !
Top