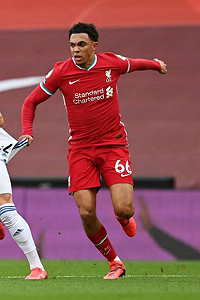 Maybe a bit off topic, but isn't Robertson's STA should be higher than Trent's?
SEMETON DEWATA
Top

yes robertson has higher stamina than arnold noticeably, but it's not that arnold should be lower than this, but rather that robertson should be higher. i have a draft of robertson that i'll post, where i rate him as red stamina.
If you don't put effort into your post, i won't put effort in my response.
Top

I'm not sure yet, but I get the impression that he is an exceptional passer.
Top

clearly should be yellows for both SPA and LPA, his passing is incredible, baines at his peak was excellent, but trents on another level
Top

been scouring youtube for his vs vid after yesterdays match, found one

https://youtu.be/AiuvsRHEZh8?t=37 rifles it (he does this all the time, huge sps for a sb)

wanted to note this run, wasnt sure if it was him yesterday, but was https://youtu.be/AiuvsRHEZh8?t=169

and of course the assist https://youtu.be/AiuvsRHEZh8?t=234

this was the main reason I wanted to find this vid https://youtu.be/AiuvsRHEZh8?t=261 this is a fucking crazy, crazy pass, the vision, speed, accuracy, confidence to even attempt it

Hes playing like a distributing sb, so good at connecting plays over distance. This is very outlier behavior for a sb, outstanding levels really.
Top

yeah, i noticed all this about arnold too, he can really hit passes with alot of weight- especially his lofted passes and crosses. i didn't see enough of these passes showing high accuracy to feel comfortable going higher than the values i had in the draft, but he did have a few impressive long passes that made an impression on me. the pass he made for salah yesterday was really excellent for example, another great show of his lps, but also accuracy:

i was seeing comments from liverpool fans who were saying robertson was the better crosser, so i assumed there was some truth to that and so i thought it makes sense to represent arnold's obvious and undeniable high level of passing weight, but make him less consistent for now when i wasn't sure about his consistency. it could be that arnold's passing hasn't been getting the praise he deserves though. i did make a note earlier somewhere that i see arnold as having the higher ceiling than robertson due to his passing weight i think.

he's been passing more and showing more of his quality lately. i think he's a really talented fullback, just like all of the liverpool fullbacks, from gomez, clyne, robertson. hopefully that means the competition will push them all to improve while trying to win starting spots.
If you don't put effort into your post, i won't put effort in my response.
Top

Just came accross this compilation on Reddit, features some of the passes you guys linked+ a few others I think. Hopefully this helps about his values, but honestly now there's very little doubt about the fact that he's very accurate in his long passing. Nice curve too.
Everyone knew it was impossible. Then came along a fool who didn't know it, and he did it.
Top

His long balls against Roma are absolutely ridiculous, pinpoint accuracy really.
Everyone knew it was impossible. Then came along a fool who didn't know it, and he did it.
Top

Share the excitement and admire his incredible passing, but that's a pretty high DEF for someone who's been a liability week by week.
Relja's not dead
Top

Looking the set, he's gonna be one of the best RB in history
Maybe you have been a bit enthusiastic on him, yesterday showed zero capacity defending / keeping the backline.. dramatic performance defensivily
Top

yeah, his def can come down
Top

he's fast and agile ... so he'll cover most of the raw speed players on the ball ... but given some good off the ball movement and fast combinations and he's outclassed
Top

Yeah this set is way overboard. He seems to have a problem dealing with right footed wingers on the left cutting inside but deals with orthodox wingers like Sane really well.

As well as a def reduction I just don't think he's really this quick or deserving of such high stamina.
Top

i think arnold is a gifted defender. the base of this set was formed last year when he was just breaking into the team, and even then i saw him as high 60's DEF. i'm quite sure about his speed as well, his topspeed is really good.

he's had some issues with getting out of position before, but i think he's good at tackling and defending generally.
If you don't put effort into your post, i won't put effort in my response.
Top

lfc 4 eva wrote:Yeah this set is way overboard. He seems to have a problem dealing with right footed wingers on the left cutting inside but deals with orthodox wingers like Sane really well.

As well as a def reduction I just don't think he's really this quick or deserving of such high stamina.

He is no normal sideback, he is an outlier, a converted CM. If you can see his passing, you can see his attack. Every game he creates key situations from aggressive, long distance passing (both spa/lpa). His partnership with salah creates at least 1 sure goal scoring opportunity per game, and sometimes several, his ability to release him reguarly from anywhere basically on the pitch is not normal, not normal at all, you do not see this from sidebacks. That alone is warranting green attack, but hes also very intelligent at linking up and creating space for his team. But above all, his ability to release from basically anywhere makes him very dangerous. As long as hes working with Salah, he deserves high attack, as that partnership is extremly dangerous.
Top
Post Reply
63 posts