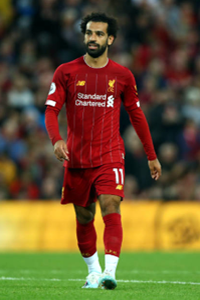 He's one of the greatest players ever.

I'm sorry that this is my first post, but let's take David Villa, for example...

Salah has higher tech (lol he does not).

Salah's tech was likely good where it was, but certainly no reason for a two point jump. Salah is a little sloppy, tho so is Villa. But when Villa played in Salah's position, he was so much cleaner. Thru the middle he was sloppier, but in congested areas did things Salah could not.

The attack rating isn't worth going into detail to argue. He's above Villa and up with Suarez and 36 goal Higuain, approaching ROMARIO and Henry.

His balance is an 86, even tho his recent fall isn't at all an isolated incident. He does go down a little easy. His footing is impressive, which helps out his tech, but he doesn't bully people, nor does he withstand a ton of physicality.

another dive vs Crystal Palace

and his second goal, will leave a link for the first later on

His balance is an 86, even tho his recent fall isn't at all an isolated incident. He does go down a little easy. His footing is impressive, which helps out his tech, but he doesn't bully people, nor does he withstand a ton of physicality.

He really does withstand a ton of physicality, with all due respect, you should watch this aspect of his game more carefully. Ignore dives, and focus on his possession and retention with the ball, especially at the wings and around the box, he is immensely hard to knock down.
Top

jurgens wrote:
He really does withstand a ton of physicality, with all due respect, you should watch this aspect of his game more carefully. Ignore dives, and focus on his possession and retention with the ball, especially at the wings and around the box, he is immensely hard to knock down.

Not arguing that he can and often does withstand physicality, but 86 is a high number.

And I can't stress enough the Eden Hazard comparison. I don't see how he faces as much, much less withstands as much physical play as does Hazard. But he's higher, and a good deal higher at that.
Top

86 puts him bit too high for my liking, I don't think he's that hard to knock due to his BB, I wouldn't say he's stronger than likes of Messi, Lacazette or Chamberlain
Top

...
"Technique is not being able to juggle a ball 1000 times. Anyone can do that by practicing. Then you can work in the circus. Technique is passing the ball with one touch, with the right speed, at the right foot of your team mate." I suggest dropping his DS even lower, like whites, as well as TW, but in terms of just trying to make a proper picture of a trully world class player with serious limits. Salah is an extremely intelligent attacker, and he's one of my favourite players on his position, along side Mbappe, because i feel they both have a tremendous quality to feel the play off the ball, and anticipate stuff on the pitch extremely well, again, while being off the ball. That aspect of football is severely underrated, and people doesn't get the concept of that, which makes them calling some players extremely lucky, while they're everything but that.

People usually have no clue how to watch football, and they judge most of the players on on the ball stuff, that's why we have a huge number of fanboys, raving on players who are complete retards, before football dump them to where they belong. Like, we had a serious amount of people who believed that Mastour will become a world class player?

Let's say Thomas Muller is the greatest example of how intelligence is important, the guy is physically awful, technically basic, yet his off the ball movement and ability to anticipate stuff on the pitch made him a world class player. I think Salah is one of those players, who's mainly up there because of that, i mean definetely is. He is, unlike Muller, physically very gifted, amazing pace, and great, great balance too, no doubts, technically also more stabile, but Salah is the guy who has no standouts qualities on the ball on this level.

Imagine just taking him the ability to make runs in behind? We'd have a winger who can hold the ball up with his back to goal, he's not a great dribbler, good close control, but his skillset in dribbling terms is poor and predictable, extremely one footed, no real playmaking qualities, basically a slight upgrade on Walcott, who's the right example of retard who had pace but subpar understanding of football. Pace is just an extra tool for Salah, a useful one, but i don't think he'd suffer completely with lower maximum speed in real life. Salah is the guy who constantly attack spaces and anticipate actions so well, that's what he does well, and that's what score goals for him.

Compare him to Alexis, the guy barely even make runs in behind nowadays, and yet he's a top class inverted winger/wide playmaker, don't @ me with mentioning his poor form, just look at the skillset, great dribbling skillset, great passing, vision, even mid-long range shooting. Imagine Salah trying to convert playing style into more "on the ball" and creativity, like previously mentioned Alexis or Hazard. That would be a proper fail, and yet he is as rated, as valuable on the same level.

We need to think of Salah as a player of immense attacking intelligence that really makes up for his -i don't like this word- mediocricity on the ball.

My idea of Salah's set would be like attack on 90, red RES and AGG for sure, lower TW, DS, and probably considering lower SA, SPA too.
Top

I think Salah is an absolutely dreadful player who has an abundance of pace, but damn can he get into goalscoring positions and score a shit tonne. He is essentially the polar opposite of Hazard. He never looks good on the eye, but always scores, while Hazard does the opposite. I'd perhaps give him *Side, even playing as a CF he tends to just stay out wide.
Top

I agree with a lot of the points being made here although some of them I think are a bit knee jerk off the back of a fairly poor game against Bayern.

It is clear that Salah is only really outstanding in terms of pace and movement, but I do think the rest of the set still reflects him pretty well. For example I don't think he deserves white DS, that would imply he basically never runs with the ball which is patently untrue.
Top

lfc 4 eva wrote:It is clear that Salah is only really outstanding in terms of pace and movement, but I do think the rest of the set still reflects him pretty well. For example I don't think he deserves white DS, that would imply he basically never runs with the ball which is patently untrue.

I think we have to the point were probably not so many people understand what DS does, pes players had been misleaded by the idea that if a player its highly rated in terms of TS he inmediatly deserves high values in DS, and this isn't always the case.
Probably Konami is the main culprit, since the commit this mistake with many players in the old gen games, the first name that comes to my mind it's Cisse and Obafemi Martins, this example sold the idea that if a player its a TS monster then his DS should also show that.

This is how i see this DS/TS thing, i think that ds and ts are inherent to each one, ts is a player's top running speed while off the ball, meanwhile at least for me, and this is my personal opinion on how this stat works. ds indicates the speed of a player has with the ball at his feet while dribbling, this means how fast a player can be with the ball glueted to his foot, at least for me that its how ds should be rated, i don't buy the idea that players that can push the ball forward at high speed should have high values most of them don't have close control with the ball meanwhile they're running at this high speeds, mostly using that dash dribbling thing, so with them don't having that close control with the ball the game start to use their TS value to make them show these great solo runs.
If you want clear examples of what i'd call DS gods in the last 20 years there are clear examples, like: Messi, Kaka, Ronaldo.

Now lets cut through the crap, i also didn't notice anything amazing on Salah's DS. I follow him since his Roma days, and even there he wasn't special at all in that aspect of his game. Then i lost his track until 2018,when he started to break nets in the premiership, and again i didn't notice anything, Salah's DS is lameful when he is controlling the ball at tiny spaces and even with lots of space he doesn't show high speed runs with his foot glueted to his foot, and the worst is that, he doesn't even have any decent ball control.
Top

I always felt that DS was a percentage of the players Top Speed he'd retain while dribbling. Not that complicated of a concept.
Top

I compared Salah's technique to Sterling in his thread to demonstrate how Sterling is overrated (still think that he is), but honestly Salah is probably underrated too. He has that ability to just kill a ball dead or manipulate the ball to set up a dribble, and has been showcasing this more and more often recently. I think he is an orange in technique here.

Also, his physical strength is just incredible. The way he can back into players and turn 6 foot + defenders so easily is amazing. I think he is well rated here.
Top

we should be considering an update on salah’s sa, he became much less wastefull on front of the goal.
Top

With his low SP compared to many other players, Salah still has the ability to shoot them over the target, he isnt good at throwing volleys and anything different he tries its either bad or not good enough for a goal to be scored, he is very limited at shooting and even looks like the bad shooters we have in brazil, id drop his ST heavily to something like 76, many other players have more consistency in shooting and Salah is showing that his lack of skill in this department will be a barrier for him to repeat his goalscoring season and it will become much worse as time goes on, even Mbappe isnt looking that bad, and Bale has showed to have more shots in his arsenal than Salah. Id also be against a SA upgrade, 83 is even generous.
Top