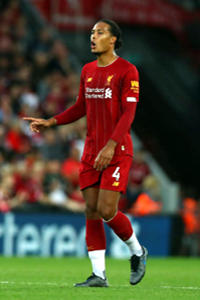 I admit I haven't see more than a couple of 19/20 matches outside of CL run, but he clearly isn't orange jump... You can see that from attacking set pieces. I can't see why a cb with no other roles/extra frontman is given 85 stamina? I won't pronunce on other key stats, but if he's not on the previous balon dor level I immediately and, maybe momentarily, brought down form to 6/5.

I think form should be one of the obvious/tedious/heavy works for the mods, to be updated a couple of times/year, even.
Saving Private Adrian His wikipedia page says he is 1.93m, same goes for every PES game he is included.
https://en.wikipedia.org/wiki/Virgil_van_Dijk
https://www.pesmaster.com/v-van-dijk/pe ... yer/44840/
Top

Atmosphere wrote:His wikipedia page says he is 1.93m, same goes for every PES game he is included.
https://en.wikipedia.org/wiki/Virgil_van_Dijk
https://www.pesmaster.com/v-van-dijk/pe ... yer/44840/

193 is too low considering his pereceivable difference with klopp(in sneakers). Then, he pretty always has a hair on matip who's listed 193,194 at times 195.

I think 195 for matip and 196 van djk might be overkill, using as reference also Allison who's more than 188 imo.

I think van djk 194/195 and matip same height or 1 cm less. Van djk has really a huge head for his size even, that make the impression of him even taller.
Saving Private Adrian

Hi atmosphere, Id like to say that, since 2008 or so, I conducted a very harsh battle for realism here on psd. I might say that I do not agree with height being not a matter of opinion.

Zlatans height was held at 192 for years, while to me was clearly taller, then in Barcellona was listed 195, I know he could appear 194 at times.

Marco borrillo still at 25 yo was held at 180cm while it was enormously clear that he was significantly taller than that, in fact he got 185cm in subsequent measurements.

As I can tell you, won't bet my 2 balls but one certainly, that juventus mckennie Isnt 185cms, but something less.

So, I think that even height might be questioned

No worries zuo, I appreciate your response.
I just felt that we complicate our lives with something as simple as height, and just because some players are not documented enough doesnt mean we should change the ones that we are certain about, like we are for VVD. He can even be used as checkpoint on 1.93m since we are sure about him, that's all.
Top
Post Reply
187 posts