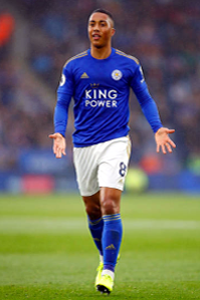 He deserves huge update, his long pases are really good, and also his tactical knowlegde...young but very strong guy for his size with very strong shot. Please update him!
Sory for my bad english

Great player. Hard to believe he is just 18, it's been a two years since his debut. 12 goals and assists in the 91 games..
Few stats could go higher. Att and Def for example. I wouldn't go with a huge Attack raise, Defence could be a few points better. He is a good defensive player, great and very aggressive when it comes to tackling. Response is also better for a few points.
With the ball he is a very good. He is quality at getting out with the ball at the small spaces, doing some really attractive dribblings at the times. Sometimes using a sole of the foot;Step on skills; sometimes doing a nice body feints. He is very quality with the ball, in short. Dribble Accuracy should be in the yellows, something like 82 maybe?

What the most impressed me is his amazing passing. He is already a great overall passer, with a bit better consistancy at it and a bit more contribution at the attack will be a top. He's already shown some great through passes, both short and long. Idk which kind of player could he be in the future. A big one for sure, but I don't know how good step would be moving him a bit more forward, smt like Antic did with Xavi at Barca.

His SA is a really good and seems like he has got an excellent Shot Technique. He is using the situations when the keeper is a few meters in front of the line...
Both should be in the 70's, ST>SA. Middle Shooting should also be added, Penalties star also. Long Ranger or the Long Range Drive? 1-touch play is missing if he already has 1-touch pass.

Stamina is in the yellows... I don't know about Balance and Mentality. Teamwork seems to be better.

And just a question - does he deserve this high speed stats?
Top

his BB seems better from what I saw at the Euro League. His physique is very advanced for his Age
Top

I don't think that he really needs this number on his speeds stats. However , he looks better on STA , BB and DEF.
''There are two methods of fighting, the one by law, the other by force: the first method is that of men, the second of beasts.''
Top

Lately this season, he has played AMF. Great BC & LPA.
He deserves upgrade on BB, at last to green. Same to SA, PK & TW.

Agree with the suggested updates, and he really deserves a "Middle Shooting" star.
Top

his long shooting is insane, he scored 3 long range goals in 2 straight matches, this kid is looking like a future star of midfield
Top

Yeah, this set is untouched for a two years and a most of areas need to be changed. I've posted some shirt suggestions in 2015. but I didn't watch him since then.
Top

What an amazing talent he is ! At the age of 19 , Youri Tielemans has played 177 games for club and country and despite being a CMF he still has scored a good number of 35 goals . Seeing that his last update was in 2014 and how much he has raised his level , i think that he deserves a good update as some users have already mentioned

.
Firstly , i think that it's better to start with his cards . He has started to take penalties for Anderlecht and has scored 13 of them , so he should have *Penalties and also seeing how many great goals he has scored form distance , he should surely have *Long Ranger and a higher SP , something like mid yellows for what he has shown until now

.
Tielemans is now much more matured and has raised his overall technique level , showing very good DA and also his first touch looks quite good to me , so both DA and BC can have a raise .
TW also needs a huge update , he is a much supportive player and a leader right now , so 71 looks just funny

Since 3-4 seasons he regularly plays every minute in almost every match , showing a good STA level and also his FORM can have a raise seeing how good he is playing since years

Some other tweaks can be on ATT , Attacking Prowess , CUR and SA seeing that he is now a much more dangerous player , his vision is very good and also he shows good curling in his free kicks

A video of Tielemans performance in this season :

Well as he gonna move and heard his name as a good promissing young I started working on him. To be honest I especially did it as it looks almost done that he'll sign to Monaco to replace someone who will leave the club in the mieldfield.

I started with Fifa set as a base, keep this one in mind, and then watching vs video to replace stats who should be. I kept more credit to vs video in UCL or EL against Manchetser or Tottenham with real oppositions against him.

What surprised me more is that he's pretty intelligent, especially for his age. He know how to place himself on the turf to cut opponents movements. He also did several nice interceptions into legs opponents. Pretty good for offensive movements also and invovle into lot of goals of his teams this season.
I keep the TW value as it is now in his PSD set but it will be something to look at. He doesn't giving much support during his teams possessions times but looks pretty good at placement during defensive duties so could have a raise for this reason.

Noticed altough his young age he's the captain of the teams and also looks like the real leader of his teams in game on the turf. He's not moving much anyway. Looks static but also looks like he know when he has to move and make effort.

When I watched this set and Fifa value, I tought he was pretty weak on duals, but he's not ! Make his body on opposition like Verratti when he has to move with the ball, also looks pretty resistant on physical challenge when he made interceptions. Doesn't move at all like said earlier so doesn't need higher stamina.

I know he has high values on speed here but he doesn't look to use it at all. Most of time he's walking, that the way he's playing and that is a key attribute to replicate his style. He has a good burst and also nice body movements but that's all, looks like a bit like Verratti in this area, using it only to escape pressure when he won a ball and rest of the time he's walking. Anyway he doesn't look fast over distance.
About dribbling, he doesn't pass opponents whith dribble, just moving his body, playing simple and mostly in one touch. He has a great first touch and ball retention, pretty great and that's for me the second key part of his attributes to replicate him. Nice technique value for sure. But DA doesn't need to be high, he doesn't making great stuff with the ball and looks limited while going on dribble wich his also pretty rare.

Third and last key attributes for his set. Nice distributor, pretty good for long passing, and also good on short ones even if the short looks less good and less consistent than the longs. He has a nice eye and good vision to give key passes.


Nice long shooter indeed like said earlier in this topics. Really powerfull shots on penalties or during game from distance.

I been looking into him for awhile myself too. It's better than the current set, but theres a few things I disagree with. I'm am extremly hesitant to give, and basically give no one but people I'm fully sure on being two footed high weak foot stats, and I've given this guy an 8. Hes completely two footed and it's key aspect of his game. I know what you are saying about his speed, but his TS is quite good for a DLP style player and I seen him use it quit a bit that'd feel it's better to give him that value that makes him more distinct from players in his mould who use no speed at all. I'd probably go higher with lpa too.

Goodjob on the work.
Top

You should have right, maybe I didn't look much as weak foot because it didn't amazed me in a first look.

About speed, yeah didn't reallt confortable to deal with it with someone like him who walking but who's able to run by times.

No problem for LPA also.