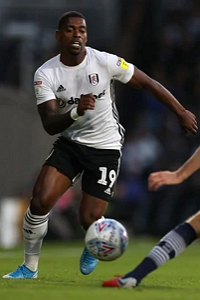 Note: Made me want to take the initiative to build the SET of Ivan.
I need your help to model definitely... suggestions, criticisms and modifications will be very welcome. What matters is the SET be real.
Greetings.

Can anyone summarize in a few words the season of Ivan in the Deportivo?
KEEP CALM and HURRAY BENFICA!
Top

He showed some good skills on frienly game against Mainz:

Weirdly enough, this is the guy that has been leading the line for Fulham's best run of form the last weeks. Works hard and runs to support the team, helps on counters, and offers versatility. RLC and Lookman have been able to shine more with the freedom this setup allows and that has pushed the team on the new results. His offensive contributions have been lower and a few times he has not been able to show off the same pace and get away from people. Would tack on SS for now and there are other changes that will be needed eventually, but lets give him some more run at this new position first.
Top

So he is 27 and still should be showing a high level in attack, however he has been decreasing a bit the last two seasons in the Championship and now in the EPL again. He is running the channels hard and working to be an option, however he is much less of a flashy player now with quite as blistering of pace or impressive of dribbling. Not much worse, but definitely declined. Shooting is a good deal less efficient as probably the most noticeable decline in his skillset. Fulham really can do exceptionally well for a side in the relegation zone, but they are still anchored there (although just barely at the moment) due in large part to a lack of cutting edge. They tried with Cavaleiro leading the line and he can do a lot for the side to stretch the pitch, give an option on counters, and work hard to press. However, it is hard to get around his lack of end product, especially when that can be the difference between the side staying up or going right back down. Worth adding SS as a secondary position by the way. I have him at the 70-71 attack range now and have his SA/ST to 72 and 85 TS, 81 DA, 82 DS, 73 SPA, 81 BC, 78 stamina, and TW definitely coming down to upper 60s (67 for me). On the flip side, I have been impressed with his header enough to think 70 is a good value and his jump can be really nice pretty consistently right around 80. Changing as a player and more workman like than flashy as in the past. However, it will be vital how this guy performs on how Fulham's season ends.
Top
Post Reply
10 posts • Page 1 of 1