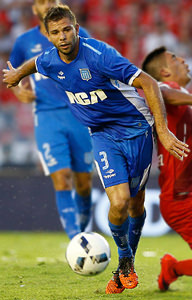 Voboril is better than him imo.
Top

He's playing really well imo, he won his place as starter with consecutive good games. He's only focused in defence, he almost doesn't attack and he's really good at marking 1 on 1. Strong and quite fast.
Top

yeah, his agg seems white this semester, and also doesnt seems too intelligent now in attack, he is decently fast and good in 1-1 something strange to find here.
Top

Imo he's much better than this set...he's for sure at top 3 lb in the league, his level is always more than good and is reliable in the left side.
Top

Well i made a post but with the sql problems was lost. Basically said, yeah is solid in his style but dont think he is better than this, he is rough at marking, he inst a pure defender and his skills barely catch my attention since a while, even something in what was good - his fk - now is just meh.
Regarding his ability to defend, he is good making some interceptions away from the d-line but as i said before, mostly of the times he commits fouls near of the box, now is much better surrounded in a five defensive line and probably looks solid.
btw added cb position
Top

Poor guy another bad injury for him, 6-8 months out. One year ago had the same injury.
Top

Paablito wrote:Poor guy another bad injury for him, 6-8 months out. One year ago had the same injury.