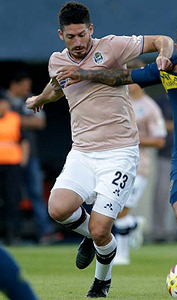 Are you sure that he is one point below Galeano?

I think a little inflated, bearing in mind that whenever you first made juice in water.
Señor Ascenso | Mr. Lower Leagues
Top

I suggest you lower your defense and body balance.


Since technical and physical skills are good. Do not know what you think about it.
Señor Ascenso | Mr. Lower Leagues
Top

Don't you think that his level of DEF, BAL, SPA, HEAD, JUMP AND TW are SUPER low?

Are you sure? He doesn't use it at all, may be when he plays as SB...but honestly I don't remember.
Top

Vs San Lorenzo. Totally shit participation as the whole defence, 0 teamwork between them and specially Coronel showed a similar technical skills than Soto who is the worst in AFA in this aspect. Slow as hell too, not so much responsive.

EDIT: Given an update with past notes and these Paablito's notes:

Maximiliano CORONEL:
DEF: Ithink is the worst of the team, the times I saw him play I saw him lost both defense and attack.
Actually he currently has value of 76 and could be in white numbers.
BAL: Another item pending for him. I think he ever won with his body against strikers, maybe had some random value, actually is 80.
STA: I some doubts about this, I don't remember when he played his last game, actually his value is 82
JUMP: Can he? No more... Actually his value is 80 and it's overrated IMO
HEADER: Same as STA. Actually his value is in 78
RESP: He it's so static, never anticipate the strikers. His value is 78, should be worse.

Vs Colon. He had a good game, was very active and recovered many balls. He isn't made many defensive headers, but in the opposition box came close to scoring twice. its speed is very good.
Top

he's sooo weak for a CB, almost annoying to see him trying to move jara, carrillo played with him phisically
"Imagine being this retarded @lucashag you fucking moron, you're seriously trying to write about football and think lingard is a bad player? you're a fucking disgrace, a fucking animal like very fucking south american moron" Relja's burner
Top

his passes is disgusting to see, awful with the ball, he cant make a single dribble, even he looks sooo stiff, but he tries and tries, at least he does something in the pitch.
Top

Vickingo wrote:Don't you think that his level of DEF, BAL, SPA, HEAD, JUMP AND TW are SUPER low?

Vickingo wrote:Don't you think that his level of DEF, BAL, SPA, HEAD, JUMP AND TW are SUPER low?

This guy is a puzzle to me. A lot of you say here that he is an awful defender, but he has been rather consistent throughout this and last several seasons. Although current numbers would make him a terrible defender, all coaches at Gymnasia kept playing him consistently. As I doubt that it was for the lack of better options, I think that there is more to his game than what we believe here. I agree with Vickingo's comment that some of these stats are super low, so I tried to figure out what we have been missing in evaluating his game and suggest an update.

Verdict:
An interesting aspect of his game is that he acts more like a 'stopper', i.e. he often pushes ahead of the defensive line and close down players before they get to the area. Although he is relatively bulky built (180cm/ 80kg), he still lacks the strength to win duels. This is why he relies on his speed and anticipation to move ahead and intercept players and balls. He also makes a lot of sliding tackles and somewhat acrobatic clearances, possibly due to positional weaknesses. His teammates often have to cover for his going forward exploits, but this can also be the consequence of the tactical setup. Anyway, it hints to good teamwork. Furthermore, there is a fighting spirit to his game and I believe that it is something the coaches appreciate. He plays a lot of games and is rarely substituted: of all games he played this season he was substituted only twice and has spent on average close to 88 minutes on the field. His long passing is also not that bad as pictured here. While he cannot jump high, I believe that his heading is very good, whether it is to make a clearance or to shoot on goal.

Positions: CB★ (SB removed cause he never played it)

Hahaha, I know, although your comment is still valid.

Anyway, I quoted it to get some attention as the less-known players like Coronel are usually dead-ends when it comes to suggestions.
Top
Post Reply
17 posts • Page 1 of 1