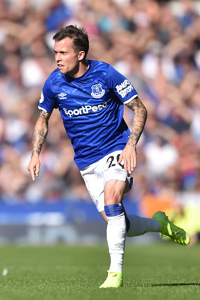 jurgens wrote:Been watching a lot of his vs vids, and this set looks pretty spot on to me. Personally, I don't see his TS really any higher than this (from what I saw at least). But his agility? Needs to be at least mid 90's. Hes so good at getting the ball with his back away from goal, and just instantly going the opposite direction, and he does these sort of moves all the time, in general his turns are just so quick too. I've gone with 93 for the moment. I'd also say he needs an orange ACC, to make him more literally "explosive".

Don't you think Short Pass Acuracy, Attack and Teamwork should be higher too?

I agree completely with your observations about Speed and Agillity, but I think he is a bit better in some technical aspects.
Top

I said it before, imo his technique isn't that good...i mean, yeah, he does make some nice traps here and there but I watched several miscontrols or not that clean to deserve that number. Btw I agree with that agility but I'm pretty sure he's faster than current. Agree on orange acceleration.
Top

He is a smarter passer than 77 SPA suggests.
He is very inteligent offensively, so I'd go with yellow on Attack.
And he moves to create passes opportunities, much more than 75 suggests. You remembered those 2 passes he received against Newell's from Dinho, right?

Well... Every player miscontrol the ball sometimes, but I think you're crazy when you say his technique isn't that good: http://youtu.be/E6kJ4i_oZoY?t=2m18s
This is just a snack, but I could easily post a bunch of splendit traps from him.

I personally think he is better than Datollo in Ball Control, and almost on pair with Montillo. But I could agree with 85.
Top

those are high yellow traps , i just dont see why he has such a low value for BC , didn't watch him much at Atletico M. or at Shakhtar but i did watch him vs Portugal & Australia and he was one of the better players on the pitch , he needs an update. I agree with higher BC , EP is easily mid-high orange , ACC is around mid orange too , TS is probably higher too . Can't wait to watch hm again in CL against Sociedad ( hope he plays )
Top

We have to sort out his stats somehow, there have been quite a lot of suggestions here but some of the opinions are kinda contradictory. I'll try to watch as many vs videos as I can and hopefully post my thoughts after that. I encourage everyone else to do the same.

This set looks quite fine IMO. I just think EP could reach the orange values and his Tenacity seems to be a bit too high.
If anyone else has anything else to comment, no doubt to post it.
"Willy Wanda is Chinese!!!"
Top

Agreed.
EP must reach orange.
Tenacity also needs an improve.
I would add 3 points on technique at least. I am pretty sure he deserves it. Just look him trapping the ball (specially the long passes) or keeping it close to his foot during his sprints. Furthermore comparing him with other players clearly below of him, his number is underrated.
No matter how hard you try, you can't stop us now!

I think KeyserSoze is suggesting a mentality decrease, which I'm totally agree about lowering it to white numbers.
Top

Fabulous. Agile as a fly. Fast as light. Smooth as water.
GREAT BEN 10.
Glad to see him showing his potential at Donetsk.
Waiting to see his updates. He deserves those improvements, already discussed above.
No matter how hard you try, you can't stop us now!

Updated. I've modified his short passing stats, added *Passing, upgraded his EP to 91 and decreased his Tenacity as suggested before.
"Willy Wanda is Chinese!!!"
Top

https://youtu.be/WT0kEYomcX0?t=6 he makes a lot of good crosses like this with solid zip on them. Think his LPS can sit middle green after doing this consistently throughout the season.
Top

He was a live wire today. Scored a goal and was just dynamic and aggressive. A little caveat should be made to say that Kiko Fermina might make me look like a good attacker, but still he was really direct and explosive. Carried the ball well, found spaces, and opened up others for teammates. Did a shift defensively as well. Won the ball back in advanced positions as well.
Top

anOKguy wrote:He was a live wire today. Scored a goal and was just dynamic and aggressive. A little caveat should be made to say that Kiko Fermina might make me look like a good attacker, but still he was really direct and explosive. Carried the ball well, found spaces, and opened up others for teammates. Did a shift defensively as well. Won the ball back in advanced positions as well.

Yes he is very aggressive but his ending product is a bit poor imo, Attack could be in 75 i think? Not so sure about his Shot Accuracy too.
Top

actually his attacking contributions and shooting are really quite decent. He’s got a really solid ability to tuck the ball away into the corners and pick the right spot, also has good ST and can control and put away some difficult balls. He’s under the radar in his impact, but I was keeping an eye on him recently and he really does make an impact accurately represented by the 78. He’s making smart runs in behind, cutting inside into the pocket of space just under the forward line, and picking some key passes. He’s got a bit of everything (except height...) that make him a really solid footballer in the end. He works hard in all phases of the game and makes an impact. Header I really cannot comment on, so that might be a little bit high, but i think I’ve seen some surprisingly good jumps from him. Free kick he’s not been able to show off since Digne, Baines, and Gylfie are all top notch strikers of the ball and ahead of him in the order. Agility might be a hair lower towards 90 now as well. For a tiny dude, he’s not massacred physically like might be expected and has a solid center of balance in him. Like the player a lot and think he’s probably the most consistent player Everton roll out in the wide areas (Richarlison drifts wide but lined up as a striker in the 4-4-2) and offers a more well rounded game than players like Walcott. Very good member for the team and does a bit of everything for them.
Top
Post Reply
82 posts