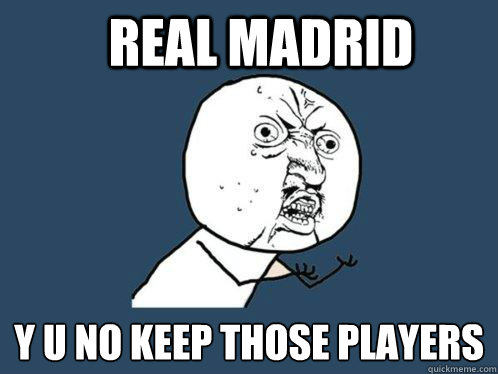 mmm.... maybe owen, anelka, emerson (??), robinho(??), julio baptista and gago(??)
Do you know what "nemesis" means? A righteous infliction of retribution manifested by an appropriate agent. Personified in this case by an 'orrible cunt... me.
Top

anelka.. yeah forgot to put him in
owen... he was too injury prone to really be succesfull? dont think he was that good at newcastle cause he as always injured?
emerson... I was thinking him, how good was he at AC? I can't rember
baptista was bad... gago too soon to say
robinho.. dunno.. hes not so great if you ask me.. still as good/bad as he was back then
Top

Emerson didn't do much for AC so I wouldn't add him.

I wouldn't say Cassano was a reject though, he was just crazy.
I'd put Mata in there. EDIT: Borja Valero too.

Cicinho had two good seasons after leaving Madrid for Roma.. then mm Metzelder? Panucci? Bizzarri as second keeper.. and Mata played in the Real youth team if I'm not mistaken.
Top

Mr. Evans wrote:Emerson didn't do much for AC so I wouldn't add him.

I wouldn't say Cassano was a reject though, he was just crazy.
I'd put Mata in there. EDIT: Borja Valero too.

I'd say that was a case of being rejected.. I mean right when he came capello didnt want to play him and then it just got worse and worse

I'm not really sure what "reject" who "madrid could have really used" means here... I mean, are we talking about good players who didn't succeed at Madrid but later, after exiting Real, enjoyed successful spells at other clubs? Or footballers which just didn't perform well enough (at least, in regards to what was expected from them) and then were sold? Are we taking the players' portion of blame also in consideration?

Cañizares in example, being a "home product", did pretty well when he was loaned out to different teams in the early 90s (specially to Celta) but then between 1994 and 98 wasn't really impressive at Madrid, so they sold him to Valencia. We know the rest. He excelled at Valencia. But... could really Madrid have used him before Illgner first and Casillas later? Because in the mid 90s he didn't seem to be better than Buyo nor Illgner.

I'd propose to just limit the thing to "players who after leaving Real Madrid enjoyed success in their new clubs", and even then we would have to define what 'success' really means, because having won the UEL and the european Supercup, Reyes' spell at Atletico Madrid has been tumultuous.

About Woodgate... he was very unlucky at Madrid but it's not like after leaving he has enjoyed much success... two good seasons, one at Boro and another at Spurs, and that's it. And Spurs seem to have improved their overall performances since he stopped playing.

Samuel should be on the list, of course, but then his spell at Madrid was a disaster (prime example of player completely unable to adapt from one league to another, at least Cannavaro tried).

And Gabriel Milito? That was a true "rejection"

Fared well at Zaragoza and later at Barça, although the reason he was rejected by Madrid (his knees) ended up catching with him.

Then Figo... he had been pretty bad for quite some time when they decided to sell him, I know he later did well at Inter but it's hard to criticise Madrid for wanting to get rid of him (specially considering his sallary).

I'd add Negredo and specially Borja Valero to the list.

@Mr.Evans
cause he was really rejected by madrid just because he slowed down and they didn't know how to use him. He and zidane were their allstars.. but then when figo slowed down, they cast him aside and replaced him with lesser players, then he was brilliant at inter despite all this
Top

Figo hadn't just "slowed down" if I remember correctly. His overall game declined heavily after his first three seasons. In his last year at Madrid he was pretty bad... slow, imprecise, selfish... it was also a matter of his general attitude too, he seemed plainly uninterested sometimes. So he was underperforming while still earning shitloads of money, good riddance I said then and still think the same. He later was good again at Inter? Very well. But Madrid were right to dispose of him then.

Of course he declined, but he was still insanely skilled. It wasn't that he was imprecise.. I never saw that, the whole madrid team was a fucken mess. There was no defense in the midfield none at all. zidane was slow and old so couldn't provide the assitance that figo needed... raul was raul... and ronaldo was lazy and unfit... and beckham... terrible imo. So you had a midfield that couldn't support him, no one to really work with... no defense behind. I rember tones and tones of times of figo getting the ball at the half way line, and having no one to work with at all, and figo getting blame like he was suposed to be a superman and do it all by himself when he had lost so much pace and he was cast aside.. when it was the team that was shit, not him. Though he was selfish. With the right sigings and energetic compotent players to support him, he would have been amazing. And he was at inter, instant success and continued until he was 36. And inter and (owner) fans regard him as club great.

I'm not really sure what "reject" who "madrid could have really used" means here...

I mean people who madrid just cast aside, didn't consider them good enough.. for whatever reason. Theres tones of them who they just overlooked (youth team players) and others who they just got rid of so they could replace them with big money players... makelele as a good example of someone they just cast aside. Cambiasso was good, but completly overlooked for not being an allstar.. then instantly at inter he was the number 1. And they really, really needed players like Makelele and cambiasso after they got rid of them. To this day... they still don't have replcements for them.
Top

Agree on Cambiasso. Makelele's issue was a mere matter of money though, he wasn't sold for deportive reasons. I don't share your views about Figo, it's true that Madrid's midfield was a complete mess back then, but Figo was also part of the problem and not exactly any kind of "poor victim of circunstances".

The main problem was having a president that knew shit about football (and still does). Redondo to Milan for €15M? Yeeeah

PS: Any thoughts about adding Filipe Luis to the list? This one was entirely Michel's fault, when he was in charge of the B team.

yeah he can be added, how good was he at deportivo? I rember a whille back he had some crazy stats for SB... probably over-rated but I not without cause?
Top

I don't think he was really overrated... Filipe was probably the best leftback in Spain back then, until he crossed ways with Iraizoz

Oh, also remember Víctor Sánchez del Amo, the "new Michel". Left for Deportivo and won 1 league, 1 cup and 2 supercups. Jaime Sánchez was also sold to Dépor (the same year if I'm not mistaken) but his records were... less impressive

And what about Luis Enrique?

Korinov wrote:
And what about Luis Enrique?

he was supposed to be in the initial list, totaly forgot him
Top

I THINK ANELKA SHOULD BE REPLACED BY NEGREDO，AS HE IS JUST A SORT OF PLAY WHO LIKES TO CHANGE HIS TEAMS,WHAT'S MORE,ANELKA USED TO SCORE SOME IMPORTANT GOALS AGAINST MUNICH~
Top

If It works well enough, Silva was rejected when he was a young buy by Madrid to join their youth system due to being 'too short sized'. Now I'd just want to kick the face of whoever took that decision.

Camacho also stopped the signing of Xabi Alonso (then at Real Sociedad) when he was appointed coach.