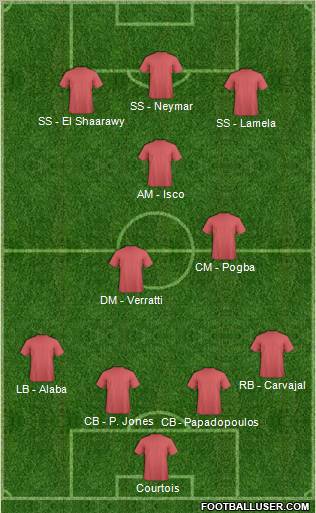 thats got to be one of the stupidest fucking things I've ever seen. Whoever made it should jump off a cliff.
Top

why? are the stats wrong?
It takes nothing to join the crowd, it takes everything to stand alone
Top

No, the logic behind that picture is fucking retarded. That's it.

Just for the record, about a half of those league goals (33 out of 65) were while he played for Anderlecht...
"Willy Wanda is Chinese!!!"
Top

Albo7 wrote:No, the logic behind that picture is fucking retarded. That's it.

These are just numbers, there's no "logic behind". You put the logic behind.

Not quite meaningful numbers though of course.
PES-Up
Top

Sterling and Jesé in
Top

What about Depay? He made some name for himself this World Cup I suppose. Same goes for Origi.
Top

I posted a list of young players that could replace the ones who are over 21, but it got deleted. I do support Depay, have my doubts about Origi tho.
Sorry for my english!

I don't have as much of a global view of football as many members on this site, but from my prem knowledge I reckon John Stones could be a good option at CB for this team.
Everton F.C.

since Marquinhos can double as a right-back i think there's no problem with keeping the current format of 7 defenders. From the replacement list Stones in particular might be a popular choice but rugani and umtiti are perhaps more deserving because they've played full seasons (almost double the minutes of Stones) and Giménez and Marquinhos are arguably better players.
a lot of eredivisie players miss out only because they play in a "weaker" league
other than that, there is possible world-class talent in the replacements but they either lack minutes (Iturbe) or have had "less good" seasons than the ones who made it to the 23. At least, that's my oppinion
"You do ill if you praise, and still worse if you reprove in a matter you do not understand." - Da Vinci
Top