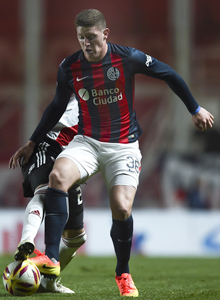 I accepted the thread posted by Dorenal to have here instead of missing players thread, first i like to have a better view have some doubtsin some values. About him i like it his style, pretty fast for his size and strong guy also is damn aggressive. Some values could be slightly worse to be fair with other values of the forum about ladders as att, st and stamina. Mostly the set is in the right way, he is the first sub in the u20 has some potential but there are other players better than him.
Top

Another one. He's on fire.
Top

He's a very very young Palermo. He'll be great if he develops well, he's a scorer per nature. I don't think he's a great player, either he's good, but he fucking scores at NT. And he's not even in first squad at his club, a rare case.
Top

Imo kinda better technically than Palermo was; he's got great desmarking movements/diagonals and a great final speed. Don't sure if he's a fox to the box player..
Top I know he's just a kid and have a lot to learn/improve but his stats could be raised in some areas.

Attack gotta be green or at least close, his presence in attack to create danger is great even when he needs to improve his finishing he knows how to move to create goal situations, top speed could be increase to yellow, he's fast and 75 combined with that low agility/ds makes him a slow player due to his height. His jump is a point to take into account, just watch his jump ability in this goal:

There are some others examples but I'm a bit lazy now

He also mades a great "jugada" in the corner vs Patronato fighting with 3 players to win the ball and he shows that mentality in the Sub 20/23 nt too.

I don't know if he would continue playing here the next year (I hope yes) but he's a very promise player but as I've said, he has a lot to improve in some areas to become a even better player.
Top

Pff what a goal he scored vs River. That touch to kill the ball was awesome. Given him some tweaks.

That goal was insane, also he showed great tenacity and stamina fighting the whole match. 4 goals the 4 last matches.
Top