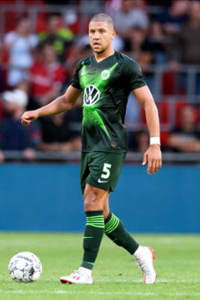 His passing stats should go up. He's always been a (far) above average passer for a CB, both short and long. Even more obvious to see now that he's playing regularly at HSV. IMO both SPA and LPA can easily go up by two points (or maybe SPA by just one). He can play some nice passes from the back, the same with his long balls from deep. SPS and LPS need a raise to, he puts very good pace in his passes.

While I also think his TW should go up, because he remains calm on the ball and because of his ability to build up from the back.
And his DS should go up to. When he makes a run from the back he shows that he doesn't lose this much pace on the ball.

Disagree with raising his AGI. He's not one of those agile CBs, a 77 is good value for him.

In fact I'm fine with his values in short passing, but you're right, he is better in long passing. Nevertheless you might make him too good, in my opinion Hummels is still a better player in this aspect than Bruma.

I'm sure he's better than a 75, he's a very solid short passes and better than most on a 75. Don't know Hummels well enough to say whether he's better than him in this or not but if he is than he needs a raise. But fair enough, maybe you disagree.
But I've seen him make short passes from deep with very good weight on them, reaching players high up the pitch. I'm sure you've seen the same, SPS has to be higher..

About Short Pass Speed, I will take a closer look in the next games. I hope he can play after he got injured on his shoulder.
And I think it is more his good view to his team-mates, some passes of him are still to inaccurate. If they are constantly not bad, we can think about a raise in SPA, don't forget it is his real first season in a first league as a regular starter.
Top

I haven't seen most matches but from what I've seen he's been doing well. What's your opinion on him?

He builds up a good center with Westermann who also seems to play more constantly than under Oenning and in the last season.
I believe a lot in Bruma, he has in my eyes far more qualities and potential than Mancienne and Rajkovic. He's a brilliant challenger with a nice timing to catch the ball and his drive forwards is great, because he has besides the the good view to his teammates also a decent speed and dribbling on the ball which make it easier to him passing an opponent. What Bruma just misses is a good positioning: at the moment he has to run after the strikers too often, but he can be lucky to be so fast and so good in tackling (sunday he booked his first yellow card).
Top

Thanks for the reply and nice to hear. His positional sense will get better, I'm sure. It's because of his lack of experience and regular football at Hamburg will help him in this.

Just wanted to point out he made a pass not so long ago (a very good one btw) which was easily mid-80s in terms of speed.

One pass is in my eyes not enough for giving him a higher value, but if he shows it in the second leg of the season again, then we can think about it.

That doesn't make sense. I argued before that he's easily worthy of higher SPS and he just showed it again. It's nothing new in his game but apparently you never noticed it. I'm not saying he should have a value in the mid 80s but SPS 76 is just too low for him, which is why I suggested a 78, even tough he should even higher than that. But I guess it's all up to you.

Sorry, but I forgot it. Although I am a deep HSV fan and very critical about them I haven't seen them at all, although I'm watching every game of them. Maybe it could be also difference that he moves quite deep into the opponent's half and passes then which let the passes look faster because of the shorter distance. Generally I didn't see many fast short passes of him.

Nevertheless I keep an eye on him in the break of the season when HSV has some testing games, therefore I also want to check some other values of him to finally change them in a bigger update.

May be I am overly critical about Bruma but to me his stats are lightyears away even from his best performances for Hamburg so far, including the time since Fink joined the club! ATT, DEF, BAL, TS, ACC, RES, AGI, DA & DS seem so unreal, way over the top. I'm not suggesting anything else, just saying that I never saw the potential for such values in him. I will have a close eye on him next season, perhaps he can prove me wrong.

I pretty sure he had a small (really small update). Believe me, values were even worst...

) But seems that when i left moderation, all my changes disappeared. They are but it doesn't appear that i made so it shows last update before mine. Thats why BL looks so updated (it is) but looks more.

I have to agree with Malakayi. And As Kruger13 said same for Mancienne. Both need an update.
Top

Decreasing his COND is a good move imo - Noticed in Liga Total! Cup that he made some interesting Long passes, something to keep an eye on...
...U dared to enter my world...

Well I know I said before that I want to have a look at how he's doing in his second season in Germany but now I have some time at my hands so I thought that I will suggest some changes earlier reflecting him from 2011/2012. Maybe he will improve (not likely

) so that he's gonna prove me wrong. Maybe I am too harsh with some values but the fact that he was a highly praised youngster some time ago shouldn't be an excuse for the generosity that his current set mostly consists of.

As you can see they only stats I increased were his passing stats. In the technical area lies Bruma's strength, he's a solid short / long passer and has a good first touch for a CB though I felt his dribbling skills overrated. The same goes for his agility, Bruma has an powerful physique but dribbling or turning his body? Face it, he's as coarse as a log when it comes to moving parts of his body in more than one direction.
I want to reduce Jeffrey's speed as well because he's way too fast with the current set. He is able to reach a decent speed for a man of his size but that takes a while, he's nowhere near a guy like Mancienne (who I also find a little overrated in TS / ACC). Talking about Mancienne I think his DEF is on the spot which made it easier for me to lower Bruma's by 1 to bring him nearer to the Englishman, both of them are anything but good in terms of positioning but have their own ways of making up for that deficit: Bruma has power and Mancienne has his agility. Response also got down because I found the current number very generous, he's much like Boateng in that department, at all very similar to the German just not as good as him.
The drop of stamina is a new-standards-thingy and I don't think more is needed because I never saw him joining his team's attack except for entering the enemy's box during set pieces so AGG had to go down a bit too.
About his shooting and set pieces skills I cannot say much but that I never saw him pulling of a shoot or kicking a free kick or a corner so I do not know why the numbers have been so high for a CB, back in my head I do think that he was used as a DMF by times for Chelsea reserves but I don't know for sure. And even if so, maybe one of our English members can give some clearance about that matter. However for Hamburg he never displayed such skills.
In terms of his aerial skills I think Bruma doesn't have the distinct abilities that are necessary to justify a yellow value in heading, his placement isn't terrible but he has to improve. In my book he has this powerful well trained body and relies mostly on his BB and jumping to win headers.
Lastly I want to drop both his mentality and teamwork because he isn't either a fighter nor a team player, the fact that Bruma is a good passer doesn't prevent him from being out of position often in Hamburg's build up play leading to situations in which his partner is faced with an attacker without a free man available resulting in a crucial loss of the ball. Also he's a typical nice weather guy who performs well if his team is winning but always seems to have lost it when his team is facing defeat.
All in all, another great signing from Arnesen :>
Top

Perfect set for me