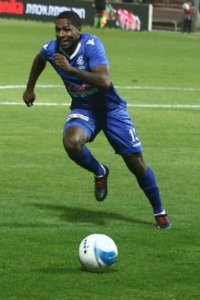 http://www.youtube.com/watch?v=2l0Ez7zEYjI
"Imagine being this retarded @lucashag you fucking moron, you're seriously trying to write about football and think lingard is a bad player? you're a fucking disgrace, a fucking animal like very fucking south american moron" Relja's burner
Top

Mainly plays CM/AMF in a midfield 5 with wingbacks. He joined late last season and I did not really get to see him enough, and did not watch this seasons practically at all, but the speed stats might be too much for what he is now. I can't recall him being this speedy, he can dribble really well and keep possession, but that pure 85 TS might be gone now.

EDIT: took his shirt off after the match, this guy is jaaaaacked.
Top

I gave him an update.

He is one of the better midfielders on the team, at least in his hold up play and dribbling capacities, but when the season started and he featured quite a bit he was found mis-matched with the type of football TFC were playing as a whole, 1-touch passing practically non stop. To Coorper's credit he seemed to modify his game a bit and became good at first time passes in small spaces that would open up play for a teammate and he has good ground through balls that on occassion can break the defense. But his dribbling mindset has remained..he likes to take extra touches and whilst he can add panache (one of the more technically astute dribblers) it seems Vanney prefers the team style to be homogeneous.

I lowered Aggression significantly as he tends to operate in the second line the majority of the time. I tried to go through a bunch of Panama highlights of the past qualifying campaign, on paper he was listed as a right mid, but in play he was basically a CMF who kept deep and picked up clearances or picked up the ball wide before passing it centrally (his crossing game has taken a back seat to his ground passing), and the same for TFC albeit as an outright CMF (sometimes he would be an AMF a bit higher) he would play in the open spaces behind the mass of players who would crowd the front looking for a killer ball to be played to them.

The speed I was right on, his AGL, ability to elude the person(s) pressing him, then use acceleration to take him away whilst travelling at pace, DS, is his true style. Maybe he had that 85 TS years ago, but right now he is slower than both Ricketts 86 and Mavinga 84 on the team over distance.

EDIT strange thing is, with his skills and the way Wing Backs are used in TFC (even Raheen Edwards who is a pure SMF with worse Defensive skills), one would think Cooper would be perfect to convert into the role, yet he remains a CMF and often on the bench behind Osorio and Delgado.
Top

He hasn't played yet

I can't wait to see his capabilities in 'la U'.
"Technique is not being able to juggle a ball 1000 times. Anyone can do that by practicing. Then you can work in the circus. Technique is passing the ball with one touch, with the right speed, at the right foot of your team mate."

I can't wait to see his capabilities in 'la U'.

So has he played since March? wiki says he has not

He is starter for Panama at CMF, wonder why he is not playing for club, suffered late in match with cramp, just dropped to the ground exhausted - really seeing as he is getting no games/lacks match fitness his Stamina currently is probably like 74 or less, did lots of running work in the midfield but was dead tired by the end.

Showed his qualities (multiple dribbles, a through ball) and surprised me a bit with his strength on the ball, he held of Carrasco (BB 79) and protected a ball for ~5 seconds standing still and also challenged Lukaku and managed to get him off the ball stop the counter as the last man before a foul was called on the Belgian.

Can't understand why he is not playing at club level, still a good player, just plays a bit too much with the horse blinders on, but his quality is undeniable.

Aggression could be even lower like 65-66, he does not venture close to the penalty area, I was being conservative before in lowering it, really a lower value better suits his style of remaining deep and free to get the ball and dribble into the oppositions lines.
Top

He only played agaisnt La Calera and then got like 25 minutes between 2 more matches. I do think he is a decent player but maybe he is not an option for his DT.
Better to die quick, fighting on your feet, than to live forever, begging on your knees!
Top

He was signed by the club staff without the consent of former manager, Miguel Ángel Hoyos. They tried to behave like Florentino Pérez, but Hoyos didn't give a shit about it.

He plays for Maccabi Petah-Tikvah F.C.
"Technique is not being able to juggle a ball 1000 times. Anyone can do that by practicing. Then you can work in the circus. Technique is passing the ball with one touch, with the right speed, at the right foot of your team mate."