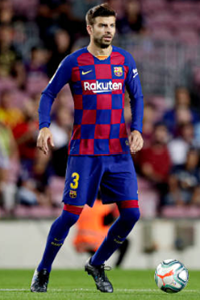 He looked pretty slow today, and not only on short distances. Alcácer seemed to have a significant edge over him in almost every long run. Not saying anything stats-wise, but something to keep an eye on.

once again , he cant mark anyone after set pieces or crosses , i have no idea whats going on with him , but i swear , marc bartra looks much better in these situations than him , he's just awful , not to mention he's so slow , his turns are like slow-mo
Top

I think 86 defence might be too much for him right now. I see Dante stronger in defence duties. Maybe im overstating, but in the latest matches i see Bartra much better in every defensive situation for Barça. Always a step late from where he should be. Watch the couple of matches were he and Bartra played. Bartra is the guy who always is in the correct spot, doing the correct thing, while Pique is just getting late at every situation. As i say, is maybe too much, but i see Pique sitting in 84 (85 at most) defense, while Mascherano, playing horrible as well, at 83 or even 82 (always late, stupid fouls, unable to tackle correctly).

Barça defense is extremely poor with Masche and Pique right now. Was a masacre against Valencia, Vela itself made them look horrible (absolutly alone). But this have been a constant in the whole season, not just this couple of matches.
Top

DEF does not have a thing to do with positioning and coordination, those are regulated by TW. DEF regulates a player's ability to get the ball from the opposition, and Piqué is still pretty good at that (tackling, etc).

He has been good this season, but he is really damn fragile.. So easy to push him away with a tackle.
Top

I only watched first half today and he was quite awful. Nothing new to say about his [complete lack of] agility, but other than that he also looked slow and weak. There was a moment when Bacca (I think) just crushed him in terms of speed (it was a sprint of ~30m, which Piqué began with at least 10m of advantage, and Bacca caught up with him so easily), then tossed him aside with little to no effort.

It's obvious he's simply in horrible shape, both physically and mentally. Some years ago he looked like he could become one of the most complete centre-backs in the world, now he only has a decent tackling/marking ability and his excellent distributing skills... everything else, strenght, agility, speed, seems gone.

Kevin Gameiro won 2 duels against him easily , i have no idea whats going on with him , although in second half he did improve and won almost every tackle , his sliding tackle is clean and perfectly timed , but lack of strength and agility is annoying for a CB , also check Alexis header and Pique's body movement or however u call that , it was like he closed his eyes and was scared of the ball , cant really explain that .
Top

What a piece of shit.
Top

Having sex with Shakira might have started making him delusional.

he didnt say he was best CB in the world , he said we was among the best 3 and that he currently isn't and that he'll work to get there again .
I dont know why do you flame on him just because of that , almost every football site or magazine had him as one of the best in his 1st and 2nd season at Barca .
Top

Not related to Pique, but... If he is in Barca or Real, he is best in the world -logic of all shitty football magazines in the world.They are like tabloids nowadays....
Top

86 defense. I think he was so shit in the WC that even I would've defended better. But then again everyone in that NT was shit this summer, so I don't really blame him alone. Still 86 means he's solid and he's just as solid as having my granny in a wheelchair, even she wouldn't be so bad as to play for Spain the way they played this summer.
How to upgrade your mate. Use the following equation ; m7 + mate = m8
Dallku scores a 63 yard volley, stunning everyone and giving Albania their 4th WC in two years, much to the Guatemalans shock, who miss yet another WC final. -My dream.

Mocking Spain's NT players aside , "solid" is a pretty vague word , could you elaborate please ?

A solid defender sits at high yellows, just like Pique does, yet a solid one doesn't make retarded mistakes in positioning and while I realize that TW regulates that, you just can't ignore how average he's been lately. He was exposed against Holland (Netherlands if it suits you I don't give a fuck) and made so many mistimed tackles. He's been exposed lately against every other side, Atletico and Sociedad games come to mind, he was utter shit. You can't place at high yellows someone who isn't reliable at the back when his team are not in total control.
How to upgrade your mate. Use the following equation ; m7 + mate = m8
Dallku scores a 63 yard volley, stunning everyone and giving Albania their 4th WC in two years, much to the Guatemalans shock, who miss yet another WC final. -My dream.

He seems to have accommodated himself to such an extent that I honestly wonder if he's still fit to be considered an elite footballer nowadays.

Despite everything wrong with him, he's still an overall solid defender, his quality is still there. Pay enough attention and from time to time you still see him making some classy tackles, getting the ball from rivals without issues, etc. But then, he will fuck up. He's become almost demichelesque in that regard. In the worst moment possible, he will fuck up. At the Clásico he was having a pretty decent game and then fucked up massively in the penalty. Then he was good again for most of the match but fucked up again massively in the second half when he almost single-handedly gifted a goal to Madrid.

Other than that, his physical decline seems to be continuing, to alarming levels. In past season we noticed his jumping ability was lacking. Now it just looks like he doesn't even have one. Watching him trying to jump is a bad twisted joke.

His fitness is so horrendous I'm no longer sure to what extent values like 80 Stamina and 84 Response can be trusted. He barely makes interceptions nowadays, he just leaves it to his centreback partner, Busquets or Alves. And when he tries, he tends to arrive late and commit fouls. He also moves little, and participates less and less in the build-up. I don't even know if Extra Attacker (Offensive Sideback), such high ATT/AGG or even these long passing values (plus Pinpoint Pass) are even needed to portray him nowadays. Mascherano or Mathieu seem more adept and eager to begin the build-up from the defence than him.

I think we have two choices with him right now: either a general downgrade (ATT, TS, STA, RES, DS, LPA & LPS, Jump, Ment, AGG, cards) or Form/Condition 3. I'd stick to the last one just because, who knows, he may get his fitness back one day, but at this rate, if nothing changes, I think a big decision will have to be made at the end of the season.

Honestly I'd decrease every single stat , there's not a single aspect of the game that he looks even close to these values , he does look decent at tackles and sometimes in positioning , but thats far from where 86 def and 84 res , Bartra is better than him atm and he's far below him , I may be just hating because I'm huge Barca fan , but he sucks like 80% of the games he plays , he just cant stay in the game for 90mins without 2-3 major mistakes , if there is a way to replicate that do it , if not , decrease everything , also jump should be -30 , not even close to 73 .
Top

For now, Response and Jump in low whites seem almost reasonable. It's impressive how much of a fuck-up he has become.
Top
Post Reply
672 posts