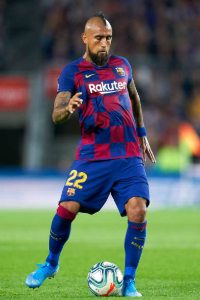 Why not,he's the guy who never gives up in this team no metter what.

It's not just his attitude, i haven't seen him play bad at important matches in ever. The only exception could be the CL final where he was constantly fouling, but even then that's the worst it can get with Vidal, too much fouling, he performs at his best when it matters. Ever since he joined Juve (he didn't have CL before), he has been very important at the final stages of every run they had, same with Bayern. That happens with Chile too, his copa america final performance and his brazil knockout stage until he got subbed off due to injury come to mind.
Top

i can't imagine how good could him be if he was a better profesional, like say alexis, it is well know he likes way too much alcohol and still he manages to perform like one of the best midfielders in the world.
Bloody Curse!
Top

I see an LP improvement compared to his previous seasons (Juventus). Im not agree with Mascherano beeing a better passer overall, and, of course, a better LPA player. He seems less responsive -compared to his seasons on Juventus- but 88 suite him fine.
Top

This is my favourite match from him probably ever. Everytime Messi touched the ball he was covering him like a maniac, and once Marcelo Diaz was expelled he had to basically play 2 roles, while being playing a more defensive role than usual. He got 10 tackles in the game and ended up being one of the standout players in the final along with Bravo.
Top

He played a very few times as sweeper under the guidance of Bielsa... But still, there's no need to keep neither CB nor SWP as secondary positions anymore.
"Willy Wanda is Chinese!!!"
Top

Mgw these are my thoughts:

Tenacity:problably one of the few players in the world with high mentality and fighting spirit in such difficult matches and when someone needs to step up,in juventus,chile and now bayern.Matches when he showed high tenacity: bayern vs juventus last year(amazing match and an amazing comeback) last year vs atletico in both matches specially the second ( fought trough all the game and that header against filipe luiz thats not just a jump,thats desire and heart to get there) the video above against argentina(celldestroyer explained that) and with peru with a goal in the last minutes playing with his both ancles fucked up.About tenacity +1/2.

81 should be enough,at 83 looks a bit generous and i havent see him displays that.

BB: idk about if you have some suggestions but to me he looks like 82/83,sometimes he looks weak due to his chases with so much effort,which one let him exposed with a simple dribble or commiting fouls,but nonetheless he is a bull in physical duels.

Interesting, will try with those suggestions soon. I'd also test him with a slightly lower ATT/DEF combo (like ATT 77 DEF 76) but with a even higher RES value (like 90-91) in order to enhance and emphasize his profile and style of a "steamy locomotive" player, utterly reactive all around the field.
"Willy Wanda is Chinese!!!"
Top

Yeah, agrre too but about his passing? What do you guys think?
Top

I think that it's time for a small update at Vidal's set . As most of as agreed , he needs some small tweaks in LPA , BB and RES but i also suggest to "change" the values between his EP and HEA . I don't really think that a 30 years old Vidal needs a yellow value for his AGI and also he is quite dangerous in set pieces and scores a good number of goals to deserve something like 80 for HEA IMO . Also , CB should be removed for sure

KeyserSoze wrote:Interesting, will try with those suggestions soon. I'd also test him with a slightly lower ATT/DEF combo (like ATT 77 DEF 76) but with a even higher RES value (like 90-91) in order to enhance and emphasize his profile and style of a "steamy locomotive" player, utterly reactive all around the field.

Did you try him out with these? I wouldn't lower his attack, however. He is pretty capable offensively and has always been, but his overall game revolves around a bit of everything. If he was commited only to attack, it would've been more obvious, perhaps even deserving of more.
Passing is updated, mostly long passing in which he excells lately. Explosive power also, as mr. Boss noted. He is surely not a player of agility, he's barely decent at it, at least not useless, and gains advantage with feet tricks and his fighting spirit, but not quick body movement. About other suggestions, I adopted DA, but would love to leave DEF/RES combo untouched and let Keyser or other speak for it when they are certain, while BB is the same since he doest strike as more than a player you can't really toy with, but he can't really do that to others either. In most physical contacts he is a player who can come to you from any side and it's always "you are close to fleeing but you can't escape" situation in which he slides or rushes in like a bull and tries to take the ball with, at times, such maniacal and unpredictable approach that it looks like he could take a tree down. But not with strenght.
Top

The overall idea of the update seems nice. I'm sorry if I didn't manage to go further for an update.
About ATT, he can still keep the current value, but that's the max value he usually shows. DEF at 77 is the stat which doesn't convince me that much. He's a fairly aggresive tackler for sure, but I don't think he's effective nor consistent enough in his tackles to have DEF further 75 or 76... If DEF was to be divided with Sliding Tackle and Standing Tackle (as in FIFA), he would just justify a relatively high value because of his slides; his standing tackles are a bit more erratic and wasteful. That's why his DEF is somewhat debatable of whether have it with low, mid or high greens, but I support the idea of low greens + RES at low oranges. His RES is, indeed, like out of this world, either as fake poacher or when protecting his D-Line behind, he uses RES like no other. Nainggolan has it at 90 atm, and I think it is fair to have both him and Vidal around the same standards RES-wise.
"Willy Wanda is Chinese!!!"
Top

I agree, he is just everywhere, his workrate and presence transcend normal commitment. I don't want to repeat myself what I think of his tackles, but yes, he is wasteful in standing tackles. He's not any more elegant in sliding tackles either, he's an unexpected butcher with good sense for duel, but what makes him great is that you can't run away from him and sometimes you don't even expect him. That being said, he is to me definitely orange RES and lower DEF. How much lower, no idea, I'm going to test him even with low 70s, in the meanwhile I have nothing against 75.
Top

Well, I gave him some tweaks based on the recent discussion. FKA was lowered the most. I know it has an influence when rating penalty taking abilities in most recent newgen PES... Is there any other good idea to make him a solid penalty taker without making him that competent as a free kick taker?

Ok, I'm aware he's scored a very few free kicks in his career, but it is very far from being a speciality of him.
"Willy Wanda is Chinese!!!"
Top

Guys , the last update was quite good for Vidal but you maybe forgot to update his HEA . He is very dangerous in set pieces and there are lot's of examples that shows that Vidal deserves a higher value in HEA . At the moment he is 3 points below Messi

, while Vidal , at least nowadays is much more dangerous than the Argentinian

Yep, he's gained more consistency with his headers for the last 3 or 4 seasons. He also scored with headers in the past, but he didn't manage to do it that often, lacking the ability to use his aerial prowess for the best (on a regular basis)


His headers have always been with plenty of potency, but their accuracy used to have mixed effectiveness; some of them well placed while others were wasted far from the intended target (most of the time, due to a mistimed jump). But his improvement in that aspect has been steady since his last 2 seasons at Juvents.

But I agree, he requires an signicative boost on Header.
"Willy Wanda is Chinese!!!"
Top
Post Reply
507 posts