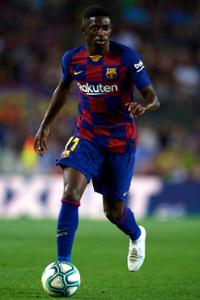 nice to see him created. Here are ome of his videos...

He is wanted by every big club in Europe atm.
Top

18 years of age and his Injury Tolerance is C ??

I guess there's some kind of mistake.
Top

saw that game in friday. What the hell is going wrong with him. If he keeps that form up, he will cost like 100million € at the end of the season

can't keep off my eyes from his DS this is really an excellent set for him, very accurate. Not quite sure his spa should be at that value as hes quite erratic, but I can see where the idea comes from.
Top

Yup, Dortmund found a diamond in this one

just thought today again this SA value is perfect. EP imo 3 points higher. Acceleration is clearly higher too, same or close to coman's. havent saw so far someone in the BL who can keep that pace.
Top

shoudlnt SIDE be L or atleast B?
Top why do you want raise tec?
Top

SPA should be lowered, dude sucks at passing
Top

He has some problems with his technique (as this set says) and also i think that SPA can go a bit down . Also he needs some small changes , Side should be B cause he can play in both sides and also he can take corners even with his right foot and uses his right a lot, so for me his WFA/WFF should be 8/8 .
PMTP & Mia San Mia
Top

SPA should definitively NOT be lowered. His major skills are imo his dribble speed, body feints and his tenacity. He is always going after every ball, really active. And his passes are mostly quite nice. Against Real Madrid he showed many inaccurate passes, indeed but stats are not just based on CL matches. That was a tough game, with lots of pressing and he played temporarily even next to Weigl and tried to build up a game, because Weigl failed. In the BL and even in the CL (except that last one) there are a lot good passes.
His shooting TEC and AC is still so damn bad. SA smells for me like something with a 6 at the beginning.
Still a really good set except of MENT, Side .. already mentioned.
Top
Post Reply
84 posts