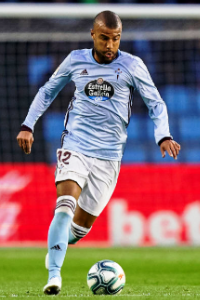 I still don't think he's more agile then this. His acceleration is good, his passing looks great, he has a great touch, but his turning is slow, he's really restricted, he looks alot like hulk, not as bad as hulk, but the same sort of inertia, shifting of weight.
If you don't put effort into your post, i won't put effort in my response.
Top

Such a shame he didn't get as much playing time as I hoped for , really great talent , good player , almost always performs , even if his passing or decision making is not on point he gives his all and helps out a ton defensively . I think Lucho wasted him quite a bit this season when he paired him and Iniesta almost every game , 2 similar players , none are natural midfielders that can control the tempo , both are more like an off ball players that can dribble past few players and split defenders with a nice pass .

Gave him a nice update , also changed his default position to CMF , similar type of player as Kovacic imo .

Here are his highlights of this past season , nice trapping at 6:20 , you can see he's Thiago's brother right there , passing comes around 7th minute mark .

He is talented, but also soooo dumb. He just can't fix completlely in Barca's one touch pass system, how many balls did he lost against Bilbao? I counted more than 10. I know there is no stat to rate that, and he is already in green ATT, so i'll just give him lower MENT. There is really no way he can be over Neymar, for example. Starts losing easy balls constantly. 70 MENT as maximum.
Top

Ramindbroken wrote:He is talented, but also soooo dumb. He just can't fix completlely in Barca's one touch pass system, how many balls did he lost against Bilbao? I counted more than 10. I know there is no stat to rate that, and he is already in green ATT, so i'll just give him lower MENT. There is really no way he can be over Neymar, for example. Starts losing easy balls constantly. 70 MENT as maximum.

It's a very good point. evenmore, never seen any reason to have SA on greens...
Top

Is he a decent player?

Too good for inter. Anyone who goes to them outside of serie a almost seems pointless at this stage. They wont know how to use them, and stifle their career. I guess it's lucky that hes multi-talented and can play multiple positions, as the real problem inter has is rigidity, forcing players into a specific role/formation, even if it's completly unsuited to them, rather than adjusting the formation based on the players qualities. That shouldn't hurt Rafinha as much as it does others.
Top

Too good.. a player out because injuries for 500 days on the last 700-something ? I really hope you are right
Top By the way, shouldn't his IT be C?
Everyone knew it was impossible. Then came along a fool who didn't know it, and he did it.
Top

Flash Boy wrote:can't say 'too good' at all

IMHO Serie A will fit him perfectly, if he take care well of his fitness probably he will be a good player for inter.

Btw Serie A has to stop receiving waste from other leagues, I'm not saying he is shit, but there is a reason why Barcelona wants to transfer him.
Top Good player, but not good enough for Barcelona. Injuries slow down his progression in Barcelona but I hope he will bring something new for Inter.
Top

seems like he's doing great , he's super talented, smart, hard working player, injuries didnt stop his development, just his playtime, because he was playing great till the injury, had a period of a month or two where he was literally best performing player for barca, scored 4-5 goals in that period of time, assisted a few as well.
Hopefully he can stay injury-free
Top

no, the injuries havn't slowed him down at all. hes an excellent player, crisp passing, super safe on the ball, very safe with retention, can have no support, but he'll always find his man. glides with the ball at his feet, good vision to. He has no place with this inter team, he still shines as hes a great player, but theres nothing for him to work with here, I'm worried for his future in this train wreck of a team. He should be at the very least, a rotational option at barca... but they wouldn't know Thiago, if he was right there on their team... so why would Rafina be any differnt
Top
Post Reply
72 posts