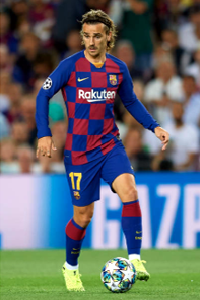 I asked in the mango but maybe the message zoomed by, how were Attacking & Defensive Prowess, and Ball Winning calculated? I found this thread http://pesstatsdatabase.com/viewtopic.p ... 2&start=60 and using the formula suggested there Attack + Attack + Responsivness / 3 , for Griezmann would give Attacking Prowess 90.

Did you use a different formula?
Top

then there is no possibility of increase? either in balance, dribble speed, shot technique.
Griezmann's level is high to only have over 90 only 2 stats
Top

Dreamteam wrote:Griezmann's level is high to only have over 90 only 2 stats

So, is that your lone concern regarding this set? That he has just two stats in oranges or above?

Sets of stats work altogether as a whole; we won't boost a single stat just for the sake of "making him god/crap tier".

Oriello wrote:I asked in the mango but maybe the message zoomed by, how were Attacking & Defensive Prowess, and Ball Winning calculated? I found this thread http://pesstatsdatabase.com/viewtopic.p ... 2&start=60 and using the formula suggested there Attack + Attack + Responsivness / 3 , for Griezmann would give Attacking Prowess 90.

Did you use a different formula?

I didn't use any formula. I didn't know there was any formula, but if we start applying it I will use it. I don't know how ATT prowess exactly works in game and what stats it implies, so Im guessing what that stat would be like according to the player's older stats, but without any guideline whatsoever.

https://streamable.com/h1bdc
Everyone knew it was impossible. Then came along a fool who didn't know it, and he did it.
Top

fixer what do you think of his ST? i remember comparing griezmann's ST to messi in some post a few weeks ago and used greizmann as an example of a player with better ST than messi, and i still think that's true. i feel like in the highlight goals from griezmann i get the impression of something like 87/88 ST, maybe even slightly more honestly? i think of quite a few really well connected half volleys, and some spectacular scissor kicks thrown in the mix from his best the last 2 years. how do you think he compares to Costa?
If you don't put effort into your post, i won't put effort in my response.
Top

yeah i totally agree. You said it all, nothing to add. Comparing him to Costa, the later is quite resourceful as well, but much more sloppy. He gets the job done, but id say Griezmann is quite better. Quite a bit better actually, and a much more consistent displayer in that regard.

i only loosely followed him at chelsea, but i think Costa improved his shooting and shooting technique at chelsea, and was dependable at being just about good enough at connecting with unusual shots consistently. though he was never quite shooting with perfect connection or that visible bang of a volley on the sweet spot, he was more often than not connecting well enough to get a good shot off, frequently succeeding at a variety of different angle/ height shots. i think costa's st is deserved, but in comparison to griezman, sloppy is a good description.

i've thought more than once that the kinds of shots i've seen from griezmann hint at the talent to be as high as 90 st. i think this works with the lowered SA, which was a change i also really agreed with, and makes the right shooting combo for griezmann. somewhere between 88 to 90 st is fair for griezmann from what i've seen, though i haven't followed him enough to be sure about if the higher end value is too much or not.
If you don't put effort into your post, i won't put effort in my response.
Top

Is there such a complete player in the database? He has yellows everywhere except gk ahah.. No seriously it's deserved. One of the most versatile strikers.

Tech >=90 anyone ? Always seeing him pull off incredible traps so casually.

His passing looks great too. 85 is ok but we should keep monitoring, in the NT to help Mbappe get a higher role he goes deeper, and the amount of successful incisive vertical passing was incredible.

Also i was wondering for new gen stats guys, finishing at 87? Could go higher since we lost ST.. 89 maybe?

And Body Control at 82 is also nonsense the way i see it. Surely 86 is ok, he kniws how to retain the ball at low speed with multiple opponents around him.
Top

Well Sanji actually what you said about Mbappé is exactly the same at Atlético...he loves pulling passes for Gameiro and Costa's runs, and they benefit greatly from them. I don't think his style is very different really...although he's getting more comfortable with time. I tend to agree on higher tech, but not even with what you said regarding ST I could agree with higher SA. There's a reason for that value, and he was too high with his previous value (90), I just can't see a reason to bring it back. I'd rather just increase his tech to make up for ST, which is defo going to help with most 1st touch situations as well.

Absolutely fantastic goal, great sombrero by Correa and insane finish by Griezmann.
Everyone knew it was impossible. Then came along a fool who didn't know it, and he did it.
Top

89 tech is falling short. Griezmann keeps showing his ability to control the ball once and again, he keeps pulling jaw dropping controls and he is not afraid to attempt them in any given situation. He has actually improved his consistency there, and now it all seems really natural. Thought of 92 tech potential in the past, but Perhaps could even be 93?

I think having Hole player as a playstyle doesn't replicate his behaviour properly, especially since it only works when he's played as an amf. Griezmann is a complete team player, and this became even more obvious since the return of Costa. This is one of the reasons why his passing/playmaking abilities became more prevalent: his ability to create space through movement is one his best assets and much beneficial to the efficiency of pure strikers like Costa, but also to Grizi's passing. It's this kind of synergy that allowed his passing to look that good. I think he has had the quality for quite some time now, he just needed a way to capitalize on his ability through concrete and more "obvious" efficiency.
I think Dummy runner is the best playstyle for him, it more or less fits everything I said, especially since it's also better suited to his positions.

On a side note, I also think Defensive prowess should be in the low 60s. Not necessarily ball winning, his tackling didn't particularly impress me, but he's very willfull and participative in defense, a bit less since Costa came back but he really is.
Everyone knew it was impossible. Then came along a fool who didn't know it, and he did it.
Top

I don't want to disarm your post but he doesn't have Hole Player (although I can't seem to find it either on the editor, it is a 2018 only card rite?). He does have Incisive Run and it should be removed. I do really agree he's become somewhat less influential defensivewise, and it's true Costa's arrival has changed that. He has been way more prolific though, as one would expect, besides the fact that Costa acts as a dummy runner for him he has actually adopted his former more offensive role, although it seems more tactically based than attitude based.

I was talking about his PES 17/18 playstyle card, I just checked again to be sure and indeed it's hole player.

I didn't expand much on Costa's role, they somewhat both act as dummy runners for each other, but this is something to expect from all dangerous forwards playing in duos to various extents really. Griezmann became more prolific because Costa movement and attitude tends to attract defenders, but the same can be said for any dangerous player playing in an advanced position. This probably would have happened if Atletico had signed any other orange ATT forward. I think Costa having the influence of a dummy runner is more a consequence of his dangerousness than a core element of his playstyle. Griezmann, on the other hand, actively fulfills and commits in this role a lot of the time.
Everyone knew it was impossible. Then came along a fool who didn't know it, and he did it.
Top

Ah I wasn't aware of that. I just can't find it anywhere nor was I conscious he had it. Yeah, I agree with pretty much everything you say otherwise.

...
Everyone knew it was impossible. Then came along a fool who didn't know it, and he did it.
Top

Sorry if I made you upset about it, it's just my opinion really, I didn't mean to minimize his influence on the game but I just don't see dummy running as such an important part of his game. Then again, I never watched Chelsea nor Atletico extremely consistently, I'd tend to give more credit to others opinions about this, right now I'm just writing based on what I've seen.

I rate Costa pretty highly really, he's an extremely complete striker in most aspects of the game. I'm not denying his influence regarding creating space for other players, etc. but I've never seen that as a core part of his game.
I mean, really a lot of strikers do that without being dummy runners at core like Benzema. Suarez for exemple does a lot of it, he is good at it but it's not really the main of aspect of his game. To me Costa falls in that category, strikers who are able to do it, whose movement and skillset allow them to do that, but then again it's the same for all strikers with great movement IMO, and I think that, more often than not, wordclass off the ball movement like Costa's do require at least a bit of dummy running.

It's worth considering that I was also and especially saying that regarding the attribution of playstyles IG, I think Griezmann is much more of a dummy runner "at core" than Costa. I, for example, wouldn't give that playstyle to Costa in game for all the reasons I wrote earlier. Probably it sounds like I'm minimalizing Costa's influence as a dummy runner a lot more than I actually am because I'm trying to emphasize how much more of a pure and typical dummy runner Griezmann is IMO, but my main impression really is that dummy running is one tool among others Costa uses well and that it's far from being its main asset. I don't deny that he's good at it really, I just don't think it's any more important to his game than it is for other worldclass strikers for example.
Everyone knew it was impossible. Then came along a fool who didn't know it, and he did it.
Top