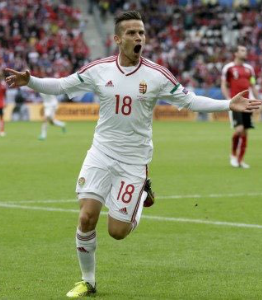 Is he that good? I don't know this player...
The intelligent people are full of doubts while the stupid ones are full of confidence.
Top

he played a fabulous season for Alemannia Aachen in the 2. Bundesliga in 2010/2011 with 10 goals and 17 assists in 34 matches but after he signed for Mainz I don't know what happened but Coach Tuchel almost never let him play.
Top

He made a good game against HSV. He seams to deserve this passing values. There are his best ability. But i see him lower in shooting, BAL and RES.
Top

Hayame wrote:He made a good game against HSV. He seams to deserve this passing values. There are his best ability. But i see him lower in shooting, BAL and RES.

yeah, he's still on the values from 2 years ago but he virtually never played since then.
Top

He showed the last game that he´s surely better than a avarage Buli player. He has a real good ST. Already made 2 nice goals per chip over the keeper. He is techniquel good and has a good speed. His BB isn´t in yellow I think. I´m also not sure about his Passing. I´ve to watch him more closely in this.
Top

this season back in Fürth he finally shows why he had this considerably good values to begin with. Still I think he needs a few downgrades.

DEF 49 -> 44 ...bad tackler, sketchy dispossession efforts, mostly resulting in fouls or throw ins for the opposition.
HEA 69 -> 67 ...his heading is terrible.
SPA 76 -> 75 ...not good a short passer in general though he's good at making key passes and short through balls in the offense so I think lowest green number will suffice.
SPS 78 -> 73 ...often his passes get intercepted because they're too slow.

Updated him. Also made some other small changes.
Top

Gave him a general nerf as best I could, but I did not see him much for DC. He struggled for minutes and did not fit the 4 AMFs strewn across the pitch they used a couple seasons back, probably too much of a winger to be used in that kinda mid role. And he was moved out this season.

I cant really say if he has those dribbling qualities still or corssing, shooting, free kick.

Just looking at his goal/assist record in past years - I did not review vids of him - he was rated really high, but often played in Bundesliga 2 and was less effective in Bundesliga - in MLS 2018 he had a good year, but not enough to be a starter or be kept on (they wanted to free money and his DP spot to younger guys).
Top
Post Reply
10 posts • Page 1 of 1