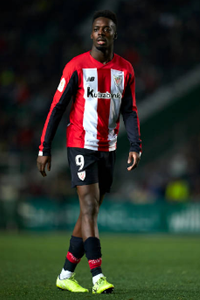 I think he's overrated. The player, not the set. 0 Attacking production, just good runs and some defensive work but attackwise so mediocre. Zero imagination.

Come on guys , Inaki Williams really needs to be updated . He mostly plays as a winger , so we should add SMF and WF to him

. STA needs to go up to yellows cause he runs a lot and his AGG can go up as well . Also his dribbling stats should be a bit higher , notably his DS

I heavily doubt he will ever be a prolific winger, no matter how pacy or aggresive he could be. He just shows some small glimpses of composure upfront once in a while. Some small decreases on DA, Tech and even SA wouldn't be a bad call at all.

What has been heavily overlooked on him is his defensive approach down his flank, as Fixer stressed out. He makes tons of pressing on opp sidebacks, to be point of being a pain in the butt for them. His speed obviously helps him behave ok as a sort of a fake extra SB. In that sense, he's quite similar to former Athletic (anti)hero Toquero, just not nearly as mentally strong as Toquero used to be.
"Willy Wanda is Chinese!!!"
Top I'm wishing that Iñaki moves to a bigger club for a cpl of seasons already. He has so much potential and he would evolve so much in another league or a bigger team imo.
Great set btw. For what he is and for what he show at Bilbao I think that's ok. I do believe he is better in some stats tho, but he is not being able to show that lately.
Top

I don't understand your post mate, why do you think he'd perform well anywhere else? He's not quite ready for anything huge, regardless of his potential he's still a player who performs 1/3 matches imo. I don't see how he could get any better anywhere else. Plus, it's not like Athletic are a small team at all? Where do you think he could be that is any better while not being out of his actual possibilities? Because honestly, he is promising, but so far he isn't THAT impressive.

I do believe the team or trainer don't make him exert the best of his capabilities, he is a physical beast and his technique is not bad at all. I saw a bunch of games from Bilbao that he was the only one doing things diferently and standing out. I'm not saying that the team is small, I know Bilbao has a lot of history, but I really do believe he has the potential to grow leaps and bounds in a bigger club (right now) or in another league. I think, for example, that there are teams and coaches that would develop his potential better then Bilbao like Milan, Inter, Liverpool, Arsenal, Bayern, Borussia... Any of those would put him more to the test or have a more important role in the squad to become the best he can be. Or going to the elite spain teams, but I don't think it seems fit for him to make a move and remain in Spain.
Top

duck23 wrote: I think, for example, that there are teams and coaches that would develop his potential better then Bilbao like Inter

he's finally becoming something more than a pacey player with huge potential, broke the drought of 40 home games without a goal..

every physical aspect of him is just outstanding and it's such a shame that he's not that good technically nor has that vision or functional brain to exploit his qualities which are worthy of envy.

on the other hand taking into account Simon from Levante just got his speed stats updated i believe Iñaki is a step above him and not just for 1 point on ts as it stands right now.

also, this might be his "best" season but seeing his att yellow bugs me and his da/tech values could be swapped imo.
Top

every physical aspect of him is just outstanding and it's such a shame that he's not that good technically nor has that vision or functional brain to exploit his qualities which are worthy of envy.

on the other hand taking into account Simon from Levante just got his speed stats updated i believe Iñaki is a step above him and not just for 1 point on ts as it stands right now.

also, this might be his "best" season but seeing his att yellow bugs me and his da/tech values could be swapped imo.

Iñaki Williams is the fastest player of La Liga. Easily 94-95 in TS. I'm using 94 at moment. I won't update this player 'cause I don't feel free to do it.
The intelligent people are full of doubts while the stupid ones are full of confidence.
Top

He's still a one-dimensional minded player, at least when it comes to attack. He's surely improved a bit in his attacking approach overall, but with ATT at 80 he would use his limited resources more wisefully, and that's not how it works on him most of the time. On the other side, his stamina and defensive prowess have both improved in the last 12 months or so, as Fixer said. So he's not exploiting his pace just for roaming or running forward hugging the line, but also to press opp over mid to long range runs. You can surely boost all stats related to those skills, like 3 or 4 extra points.
"Willy Wanda is Chinese!!!"
Top

Yes, was gonna comment a similar thing. He has added up some more brain to those runs of his, and thus has become more consistent. He's now getting a few chances per match - generally - and seizing some of them. I was going to suggest an attack increase as well. Also agree with Eternal Night, about his speed...basically all I came to suggest has already been said so add my +1

I'm very expectant to see how this player performs throughout the season. He has a great opportunity to show if he is a very high level player or just a very good player for Athletic Club. He has a very powerful shot, but this isn't usually accompanied with good accuracy too many times. I think he could deserve white numbers in SA, since he fails too many clear scoring chances, but it's just an opinion.
The intelligent people are full of doubts while the stupid ones are full of confidence.
Top

He has 133 consecutives appearances in La Liga, breaking a record for Athletic, hasn't been injured since 2016, he's a solid injury tolerance A imo.
Top

He is very good in the free spaces due to his great TS, but he doesn't have many resources when he has to look for shooting positions in the box.
He has always been criticized for that lack of knowledge of movements and creation of danger a few meters from the goal, so it's necessary to lower his Attack a bit.
His SA is nothing special, but he supplies it with a very powerful shot.

Tweaked.
The intelligent people are full of doubts while the stupid ones are full of confidence.
Top

I agree with lowering his att. But his sa is way too low compared to other similar players. And maybe is just me but I think this is one of the most fastest players in the world, I even think he deserve 97 TS
Top
Post Reply
40 posts