We must wait until the start of the new season, because Koikili was left out of the pre-season training squad by Marcelo Bielsa, also Balenziaga was left out. Bielsa took Xabi Castillo and youngster Enric Saborit, the future starter LB.

Aurtenetxe currently is playing with Spain U-19 and probably will play as CB, his natural position... 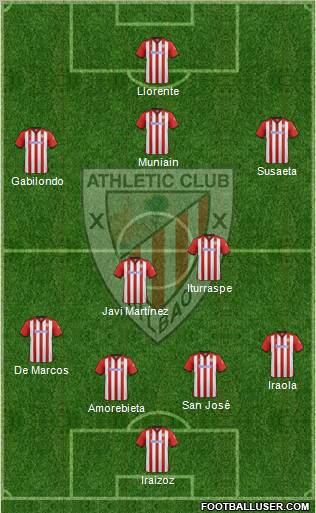 This is one of the most used line-ups in the last times.

Ander Herrera is injured.
The intelligent people are full of doubts while the stupid ones are full of confidence.
Top

It's hard to tell. Bielsa has tried a lot of players and after the last match I dont know If Ekiza Is going to be an starter instead of San José (He's much better than him imo)

Bielsa has used 3-1-3-3 too... Marcelo is, at moment, a little disaster in Athletic. He doesn't find the key.
Ekiza is much better than San José but Bielsa doesn't watch the difference between them...
The intelligent people are full of doubts while the stupid ones are full of confidence.
Top

As far as I'm concerned, it seems Bielsa has already found a more or less stable formation (he still rotates the squad, but that's not any problem). What do you guys think?

I think so. Aurtenetxe as LSB, de Marcos as LMF or even CMF...Also Iturraspe plays sometimes as DMF/CMF , Susaeta RMF, Muniain as some kind of SS falling a bit to the wing , Ander Herrera as AMF / Offensive CMF...more or less... how do we do It? Plus free kick takers and stuff.

that is what I remember in the top of my head.
Top

There are two new lions missing who made their appearance in first team.

-Jonas RAMALHO
He made his debut last 20th November against Sevilla in Liga. He played as RB but he can play as CB too
http://en.wikipedia.org/wiki/Jon%C3%A1s_Ramalho

-Iñigo RUIZ de GALARRETA
He made his first appearance last Wednesday against PSG. Probably greatest Basque hope for next years. He plays as CM, playmaker
Top

Those players are in Spanish Lower Leagues. They play in Bilbao Athletic. In the forum of Athletic Club are the players of the 1st team

This is the current starter squad: nice image, Korinov, but I think Muniain is more a wide SS with Incisive Run behavior than a centered LWF. Just my opinion.
Top

I would swear that De Marcos plays as LAMF and Herrera RCMF. A common strategy in second halfs is to change positions between De Marcos (as LB) and Iñigo Pérez (as LCMF).
Top

I think there should be an update on the players of Bilbao,
for example
Susaeta, Iturraspe, Iraola, Amorebieta, Aurtenetxe
of these players, their performances have been outstanding,
maybe for tactical work of Bielsa, or the desire to win.
but, the game show is very different to that shown in the PSD.
in my opinion there should be a review and why not, an update to make it more realistic level of play of all equipment
"No soy el mejor del mundo, pero creo que no hay nadie mejor que yo"
Jose Mourinho
Top

somebody can post here the style of play of teh team? i mean "style of attack, defensive line" etc
THANKS FOR EVERYTHING, THERE WILL BE NOT ANOTHER LIKE YOU


* Core elements of the philosophy of the game:
- An extremely high line and pressing all over the pitch
- attacking minded football
- keeping high rhythm in the game
- The fullbacks pushing very high up and marking the opposition wingers
- getting the numerous advantage in the zone of the ball and in the box
- Assistsareperformedfromtheflank (states that the considerable amount of goal threats happen after passes from the flanks)
- Using as one of the central defenders of the former central / defensive midfielder - prefers high pressure and thus the central defender acts in a more conventional band, more mobile, able to quickly organize an attack in the selection of the ball
- Using as an attacking central midfield player flanking the former (the game is on the flanks, the shift to the flank attacking midfielder with experience of action in this area -strengthening the capacity of the team in offensive actions)
- The role of the fullbacks can be used by the former wingers: according to game systemsfrom Bielsa - backs actively involved in the attack, but may move diagonally from the flank to the direction of the centre of the box.

* Any substitutions are performed during a game aim at preserving / strengthening of attacking potential and keep the level of activity in high pressing
1) substitution of the central striker (Toquero -> Llorente) in every game in last 20-25 minutes - to keep the level of activity in the front line, both in the attacks and in the transition todefense.
Toquero demonstrates high activity in the pressure an opponent. In addition, he is more inclined to shift to the flank in the early stages of attack (attacking midfielder in this case moved the position of the center-forward), able to hold the ball.
2) Perez come in as a central midfielder or left midfielder
3) San Jose come in for the central or attacking midfielder - San Jose play on the position of central defender, and Javi Martinez go to the position of central midfield. In order to strengthen the midfield and keep active pressure in the middle of the field

Goal threats
* Main sources of the goal threats:
- crosses from the right flank (Iraola, Susaeta)
- pass from the left flank zone of the penalty box (De Marcos, Muniain)
The leaders in goal assist in La Liga – Susaeta (4), De Marcos (3), and Muniain (2).
* Allthecrosses/passestotheboxaimatthecentreofthebox, even more at the centre of the keeper line. 63% of shots were performed from the box, most part from the central zone.
* TheaccuracyofshotsatgoalinLaLiga – 11%.
Structure of scored goals in the games of La Liga
• 10 from 27 (37%) were scored after right flank attacks
Hereare 2 options:
А) incounterattacks–performed diagonal ball from the center to the free zone on the flank, where the player entered into and sent the ball to the penalty box
Б) overlaps down the flank in triangular combinations and cross to the box
• 5 (19%) were scored after success in high pressing

• 6 (22%) were scored in corners.
Mainthreattotheopponent’sgoalisLlorente – scored 8 balls (4 with head); perform more shots at goal than others (2.6 per game)
Atthesametime – the wide range of players who can score - 12 players scored 1-2 goals.
Top
Post Reply
58 posts