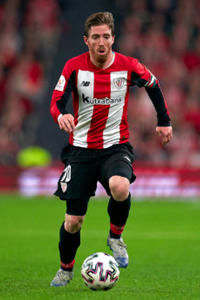 TeamGrizi wrote:impresive youngster but i thinking to increased his AGG to 88 cause he get fouled often Set hasn't been touched in a while. Can't promise anything but I'll see what I can do about it.

Just saw this post on the Underrated 10 and a user mentioned Muniain so It came back...Followed this guy for a bit for a couple of months and there were a few things I'd like to say about the set.

First off, as much as Muniain is an amazing dribbler and is able to retain the ball amazingly well in most situations, I just can't see his agility being at this level or anywhere close for that matter. There is some fast stuff he can perform with his body indeed, but most of it is due to his control of the ball at all stances, and his surprising body balance. Sometimes you can see him using really quick body turns though, but I can't see that agility in other situations on which he'd rather use his pure skill on the ball and his dexterity to stay on his feet. My thoughts are something on the lines of 84-85 agility.

Another thing that needs changes are shooting stats. I think these could be somewhat 'traded', as in a ratio from ST > SA > SP. Muniain's shooting's got good things mind you, his placement is nice sometimes and he's also shown glimpses of nice ST, but his power is just sad. Honestly, one of the few reasons such a skilled and even deceitfully dangerous (and I say this because his numbers have always been rather meh, although he scored 7 goals last season in La Liga) his shooting is so extremely awkward due to its really poor SP. Most of Muniain's goals come from a rather good instinct when inside the area, but the end product tends to be unconsistant. My number for SA would be around 75, SP 68 and ST 77, I just don't see any reason for him to be any above 70 SP to be honest, even when he has scored from a long range you only have to watch how the ball falls to notice there is just no power there, at all.

There's also another important thing to highlight his style of play imo, and it's his passing. He is a good passer, specially on short balls. I have seen him repeatedly pull 2-3 beautiful passes, sometimes even more. These tend to come from a shorter distance, very much like Isco's, but usually with flawless accuracy and of all sorts. I think he should have something about 88 SPA, but also with a rather low SPS (not too low though), perhaps something like 77.

I can't see any reason to review any of the other stats, I believe he's well rated on ATT (maybe could be even a bit higher, I'm open to discuss about this too) and TW. Maybe TS could be a little lower but ACC seems spot on as well.

I believe this guy is finally coming to show more of that enormous potential of his and I'm glad to know. When he plays freely over the pitch he's just so damn dangerous, kinda like an AMF that tends to fall to the sides, specially to the left but he's happy to roam all over the pitch, he can pull so many things with ease and he's great at setting up the tempo of the game, as his ball retention skills are insane. I really hope he keeps up with his progression next season because he could become a bomb.

i remember munian from 2012 to 2013, like the bilbao match against manchester where they wonderfully outplayed united- at the time i recall that i thought his agility was really remarkable in combination with his dribbling, really superbly sharp turns with the ball like you say but also generally extremely elusive and nimble, but that was some time ago. do you think this is a worthy classic set or does it need some tweaking?
If you don't put effort into your post, i won't put effort in my response.
Top

I think the set is overall pretty good and could be kept, but shooting stats may use a revamp too. Other than that I'm not truly saying he is not capable of some worthy of higher value turns, which I believe he can, but not sure it's something the displays that much often.