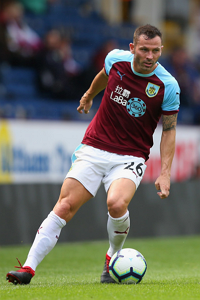 why sometimes when the frontline isn't doing its job he runs the whole pitch and tries to do it himself, quality little player him, these stats don't reflect it though.
Top

I agree with jmg's suggestions and i think his passing stats are to low, DA could be higher, aggression also and i don't know about his heading.
Top

General update. I've upped defence, but not to the level Jason was suggesting, his positioning can be rather poor at times, although cetainly better than the previous 63.
"If you are first you are first. If you are second, you are nothing" - Bill Shankly.
"I guarantee fourth place" - Rafael Benitez.
Top

He's been called up to scotland, so I have reversed his nationalities (English will be removed once he plays competitively), I have also updated the formatted and fixed age, shall I fixed the stats?
Top

Depends what you think needs fixing?
"DEBT IS THE ROAD TO RUIN" David Gill August 2004

without having a look, every stat
Top

He is regular LSB this season, please update.
Top

How about for the sake of discussions:

Attack: 71 : Can take up some decent positions during attacking play but not really a presence in the box.

Defence: 73 : More effective when defending and rarely caught out due to poor positioning.

Balance: 83 : Holds up the ball than an 82 would allow, usually against larger opposition.

Top Speed: 81 : Decent pace but sometimes caught out up the park and doesn't get back quick enough.

Response: 81 : Decent reactions to loose balls or a heavy touch.

Dribble Accuracy: 76-77 : Can beat a man when he has to and has shown some decent dribbling ability at times

Short Pass Accuracy: 73 : Decent passing accuracy without being anything special. No worse than some strikers.

Long Pass Accuracy: 76-77 : Can put some decent crosses into the box with either foot.

Shooting : Should be standardised, doesn't get to shoot often but shows a decent level of accuracy.

Curving: 78 : Consistently decent curve on most of his crosses.

Technique: 78 : Better first touch than a 75 suggests, shows some good touches under pressure.

Aggression: 82 : Has recently started getting forward alot more recently usually as an outlet for the wingers. Sometimes also get him caught out at the back.

Mentality: 85 : Always running or looking to put a tackle in even in the later stages of a game.

Weak Foot Accuracy: 4 : Uses his left foot more since being played on the left to decent effect. Okay, so here is a player who's come on leaps and bounds ever since Steve Bruce has brought him under his tutelage, he's been played on both flanks and has shown both his consistency and versatility. The old set, is, old, he doesn't deserve near on any of these values. So now onto the set.

Attack/Defence:
A feature of Phil's game which has been overshadowed mostly throughout his career due to his hard working nature and crunching tackles, this season Phil has displayed in so many of his matches his ability in the final third in his crosses and his finishing, which is quite surprising. On both flanks he's shown accurate knowledge of how to move up and down his flank with consummate ease, unfortunately Phil doesn't have exactly what you'd consider a winger who likes to defend on both flanks, when he does foray forward he has to track back due to lack of cover, which at times has shown his weakness defensively, he's shown he's more ambitious when going forward and thats shown in the set with the aggression raise. All in all, Phil has shown he's grown as a full back and has developed into an aggressive attacking full back.

Work Rate
Tireless could be a word which is often associated with Bardsley, but its not without hard work, a pre-season stint in a boxing gym is credited with improvements to his fitness and primed him to seize the opportunity presented by Kieran Richardson’s early season hamstring injury. The result is that he has started every game since Game week 6, being subbed on only one occasion, and is enjoying one of his best seasons, showing a raise in both Stamina and Mentality is worthwhile, he's trained and has shown in his performances that he's become a more industrious member of the team and this has definitely endeared him to the Sunderland faithful.

Shooting
BOOM! BANG! WHAM! Seems like an old Batman episode, right? No, its just how the net has reacted after Bardsley's mean right hook has hit a bullet of a shot from range at it, it may have come to a surprise to many a football fan when he bashed in a long range goal against Aston Villa due to it being his first senior goal, especially to Brad Friedel looking as bemused by the shot from long range as the crowd as he was left watching while it hit the back of the net, Phil proved once again that he was more than capable in scoring against Chelsea.
Top

Look at first post. Look at the set there.
Top

Get them in the first post Paddy!
"DEBT IS THE ROAD TO RUIN" David Gill August 2004

Paddy has posted the set from the first post, the numbers in brackets are the changes that he is proposing to make. So he's actually given him SPA 72 SPS 74

To make things easier to follow, here's the proposed set as it would look should it be updated:

What a goal this week! He surely deserves a higher SP
Top

his winner against Man. City: