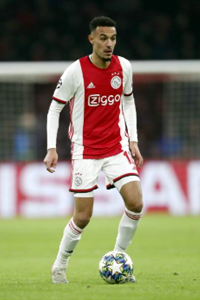 Noussair is a player from the Ajax academy who didn’t get the attention like players as Van den Beek, Nouri and De Ligt, but he pushed through to the first team and conquered a plays in the starting XI. Originally a midfielder, he knows how to play when in possession of the ball, but is not so good positionally.

I like his attack and defence in this set. In my set i have him with attack 70 and dedence 58. But i could live with these numbers.
I dont think his TS is this high. It could go a tad lower. I would go for an 81. His agility could also go down to 80/81. His respone hower could go a bit up. He is sharp, but positionally weak.

He has a real awkward kind of dribble it looks like he pushes the ball to far from him, but he is always in control. For now i would keep him on this number.

Spa could go up to low green numbers. He knows how to keep posession and thats important for a back in the ajax system.

He really is an indescribably terrible defender.